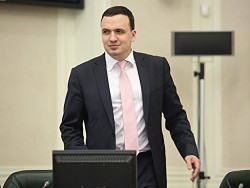 Before the big public resonance was caused by a video in which Sverdlovsk Deputy of the state Duma from “Fair Russia” Dmitry Jonas fires his gun in the air. It happened in the town of Kamyshlov, among houses. In social networks, the MP at first said that it “has shot a friend from a Gumball machine,” but then admitted that he really took up arms. Znak.com talked to him about how the incident occurred, as it relates defrauded real estate investors and conflict of the Deputy from local prosecution.

— Can you tell me what you did yesterday in Kamyshlov?

— I came to Accra, because we are already more than two years engaged in the theme of deceived people, who were stealing from the developer by the name of pancake (Dmitry Blinov in 2016 was guilty under article 176 of the criminal code “Illegal receipt of credit”, but was amnestied; in 2018, has received 4 years of probation under part 4 of article 159 of the criminal code “Fraud committed by a person using his official position, in especially large size” — approx. Znak.com). People took loans, invested in construction of his house, apartment received, now paying the loans. Mr. pancakes with unclear loyalty of the local Prosecutor’s office got off ugolovkoy, but in connection with the anniversary of the great Victory was pardoned. People say we pay the loan, the developer pardoned. I have worked on this subject. Two years ago, I brought people to the rally in Yekaterinburg, which was going to the Governor. Since then, the situation is not moving, so there I went to them.

— The firing of the gun as something to do with your conflict with the developer? The circumstances under which the incident occurred?

— No. Paul Gribkov, the man who in Kamyshlov, this problem has been (the head of local branch “Fair Russia” — approx. Znak.com) gave it to me in his arms and said, “look, ogoloshennya machine”. I clicked — shoot. The police arrived. Ogoloshennya machine I really picked up, video all seen.

Yes, I was wrong, an administrative liability is provided for, willing to accept responsibility. Did something stupid, we are all human beings. Moreover, parliamentary immunity does not apply to administrativku.

Today at 16:00 will hold a press conference, will lead Gribkova with its machine, it will be possible to look at it. But Federal greater resonance on the theme of friendship holders with the local Prosecutor’s office, I definitely could not cause. Now all Federal mass media wrote about this, and before more than two years nobody did anything. Next time, if need be to draw attention to a problem, I’ll shoot out of a cannon.

— That is, it was not originally a PR story?

— No. Moreover, after some time, we approached people with an offer that recording to buy, otherwise it gets in the media.

— You have made an administrative report or an inspection is carried out?

— No, it’s not made up. We were visited by the staff: the crew of DPS and PPS, blocked my car, not allowed to drive. To the question “Where’s your gun?”, we answered that here he is, ready to deliver, but nobody was interested. Employees [the police] said, “You all know, we have a team”. The problem is that the day before yesterday in Kamyshlov died the chief of police, so yesterday there was a mess.

Today [at the press conference] will tell. In General, ogoloshennya machine is sold without permission, he is not shooting live ammunition. Once again I admit that you were wrong, all people all do stupid things, willing to be held accountable. I will the next time be more attentive to the people you communicate with.

— Just want to understand how you came up with the idea to shoot in a residential area.

— Just give me a gun. I looked at what the documents he ogoloshennya, so fired. Didn’t think there would any problems. But the local Prosecutor doesn’t like me. In the story, when the man the Prosecutor had put out of my phone and broke it, nobody cares, and when the Deputy was shot… Although I understand, with deputies it is necessary to ask three times more than ordinary people, do not argue, therefore, should be responsible. Prepared for the Commission on ethics. But nothing terrible, I did not.