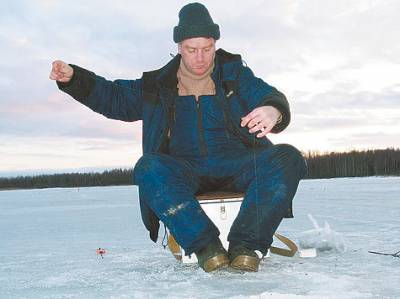 As the melting of the snow and ice pack fish make both near and distant migration.

Much in the behavior of the fish depends on the state of water and its level, the characteristics of ice (moved it from the shore or yet, dense, porous), and, of course, from weather conditions (high, low pressure, wind direction, temperature).

I often ride on Yauza reservoir. Its a huge area of many productive zones.

If the weather is consistently warming, flocks of peaceful fish migrate to shallow areas in the bays, the estuaries of the rivers flowing into the glaze.

For example, in district d. Organici from mid-December to mid-March bream, white bream, large perch, measuring roach, white bream are often caught at depths of 6 to 10m, while at the end of March — beginning of April these fish usually come on rich feed point with a depth of 4-6 m, and sometimes less.

In order to concentrate the fish at a local site, I use bait. Usually white fish in near and distant from Moscow reservoirs use live bait. In the spring it is very important the fish is not to overfeed. Bait should be very dosed.

Read the story “Where the fish”

In the spring on large reservoirs I choose the area where you can catch big bream and large roach. Near village Organici on the Yauza reservoir schools of these fish often kept in extensive pitted glaze with a depth of 4.5-6 m.

Arriving at the fishing area, I choose a base point where you leave the fishing bag and start drilling holes in a specific pattern. Usually free from other anglers in the area need to drill wells at a distance of 5-8 m from each other.

If the elevation of the reservoir is well understood, they can be done on points where there are some features of the bottom: small holes, mounds. If the bottom is poorly understood, I drilled holes in the squares inside the big square, which can be 25-50 m. Then the harvest is in sequential order — from the center to its periphery or perimeter of the square and to the center.

To search for fish using light spinning with cork handle, empathetic nod and open coil. The coil should have the key brake, which makes it easy to loosen and tighten the line. The choice of jig depends on the depth of fishing and the characteristics of the reservoir.

Usually at the spring fishing show yourself a good jig black, grey, green and yellow flowers: “ant”, “Zebra mussel”, “pellet”, “oralce”, “drop”, “lentils” and others. If discovered a flock of bream and large bream, in the evening, two hours before dusk, to pour into this hole, another feeder bloodworms and fishing at night.

For bream and roach need to have these lures were elongated. The Jack better fish without the needle picking up the game in the same amplitude and in the same rhythm. If the fish activity is weak, then the addition of a single larvae are small maggots or burdock moth can greatly improve the bite.

Read the material in “These dangerous “two-legged” containers”

At the spring fishing is not removed from the accounts and float rod. Especially when bream fishing, when the angler often uses simultaneously two or three tackles.

You know, sometimes a big bream or bream is in close proximity to holes, but does not show any activity, while it does not allow to feed other fish — roach, white bream, perch. However, perch and roach are inactive in the night, they feed in the daytime. But the same picture may occur during the day.

As soon as a flock of bream moves away from the holes on the jig, one after the other begin to get caught roach, perch or other fish. The same applies to the predator. If lured to the hole approached the predator, the bite of white fish may suddenly stop. Useful then at some distance from the tame holes to put imitation fish. 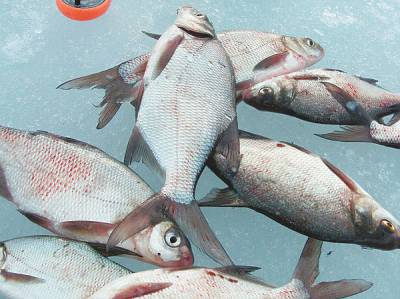 Sometimes the outputs on the “point” variety of fish are at close to bodies of water. For example, on the Pirogov reservoir in the past year I with a friend were caught near the village of Sorokino.

Half day proskau fish, finally found a flock of large roach on the old flooded riverbed near 95th pier. Prokormil five pairs of holes, was the most successful to catch at one point on two rods with a nod and a jig — one in the game, the other still hanging bait. The catch amounted to two dozen major plotvits.

Tent for night fishing at last ice is not necessary to use if the nights are warm. Night when fishing outside the tents also have a lot of walking, not because the bream too often walking from one hole to another. If you sit all night in a tent, then you have less chance to catch a big bream.

Read the story “Bear hunt will master not everyone”

It is extremely important when night fishing for bream to carry out the most delicate play on every hole to try different wiring options jig. You need to play and at the bottom, and rising from the bottom to the level of 0.3-1.5 m, and drop from a height of 1-1,5 m, and also set the lure is still close to the bottom and wait for a bite.

Separately, the white bream. Spring fishing white bream on some waters can be very effective, while trophies can weigh 300-400 g. In larger rivers, the bream catches are larger.

On the Oka river in the period of solid ice managed to catch a white bream weighing up to 1 kg. But when fishing on the spring ice of rivers need to be extremely careful. Without insurance and alone here on the ice is better not to go.

White bream I catch on the feeding holes with a nod and a float. Often in paired holes of one float and another with a nod. But if the bottom has large deposits of silt, for catching of white bream (also roach) is required to apply the nod because it keeps the head from sinking into the mud. When fishing with float tackle this is difficult to achieve.

Bream are biting very carefully, and fishing sometimes helps out placed above the jig three-centimeter leash with the smallest hook: the moth in the white bream or roach captured much bolder than on the hook of the jig. The spring in a snap-I just successfully caught a white bream on a small piece of the common earth worm.

The white bream is a very gentle bite. She may long to pull the head and throw a nod, and it’s not clearly. Often she bites off the bottom only on the stationary jig, so the bait holding, laying on the ice it is impossible, or you’ll be late with the cutting.

The best bite of the white bream is often observed in freezing weather. It often happened: catch with a friend on the holes right next to each other, but one takes a large bream, and the other only silver bream. And this at a time when we both clings on the hook for 6-8 bloodworm.

Here pertinently to tell about a special bait, which very rarely uses the ice, but it works efficiently for various large fish, especially bream. So, near tributaries, spring streams of water begin to wash from the shores of the earth with reviving food, a good feed of bream washed feed bloodworms mixed with earth taken on the Sunny pripeka from under the turf.

This land smells of worm, and the smell of the bream familiar. Bloodworms should be mixed with dry earth and put it in the trough on the bottom. If the ground contains particles of peat, they will be wet, muddy form attractive clumps. Ground bait is more suitable for catching large white fish, but it fits and perch.

Need to world had no less than 20% of bloodworms. And one more feature: some ledovyh reservoirs, such as the Yauza, Mozhaisky, Istrinsky, to be a good catch, spring, it is desirable to feed clean feed bloodworms, and mixed with unwashed bottom debris.

According to the latest ice fishing is more predictable than in gluhozime. You can always be with good trophies if you know the features of the reservoir, using the accumulated knowledge and apply the appropriate tactics of catching, combined with the right gear.