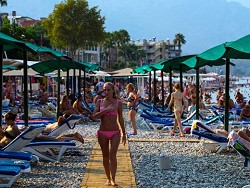 Turkey may abandon the system “all inclusive” (all inclusive) that made its resorts all over the world. But to learn from the Turkish experience intend at Russian resorts, which have increasingly to compete with overseas.

Say “thank you” to the Rothschilds

Competition of Russian and Turkish resorts tougher. According to official data of the Federal tourism Agency, the popularity of outbound tourism is growing steadily, and a leader in the growth rate of tourist arrivals is Turkey. At the same time, the number of tourists on the black sea resorts in the Krasnodar region have not even exceeded last year’s level, but in the Crimea flow decreased by 4%.

Against this background, the Turkish authorities themselves seem to be ready to present to Russian colleagues “gift” of great generosity, abandoning the system “all inclusive” (all inclusive) — the one that got the fame of the Turkey. Although invented it at all, not here in Europe. In the thirties of the enterprising Briton Billy Butlin created the holiday village, where meals included in the price.

And for that time it was a real revolution! But such that its consequences evaluated is not immediately. Only in 1950 a Belgian water Polo player Gerard blitz, on the island of Mallorca has created a luxury Club Med. It was a modest camping on the beach, consisting of wooden houses and tents (decommissioned, by the way, the US military depots), where even electricity was not. “Tourists” even washed together, but did not pay for food.

One of the guests of the club were 35-year-old Edmond de Rothschild — heir of a rich family. He became interested in the new “format” of the travel industry and invested in the business Belgian athlete millions of dollars. Today Club Med brand is known throughout the world, the brand employs nearly seven dozen hotels, mostly in the Paradise of the world.

Gradually the new system “all inclusive” began to take root in different countries. Today its variations there is a great variety. For example, all inclusive soft (AIS) — when full-price does not include alcohol or mini all inclusive (MAI), when free pour only local alcohol (wine or beer).

And there are, on the contrary, ultra all inclusive (all inclusive or plus) when the client receives in addition to supply additional services: a free visit to your own hairdresser, hotel, sauna, flood-lit tennis courts, restaurant à la carte, additional eateries, a daily mini bar consumption in the hotel room…

In General, options as possible to please the guest, a great many. And with all that experience built up over decades, Turkey plan to give up.

From white water rafting to Golf

That all-inclusive Turkish resorts have become obsolete, said the head of the Confederation of tradesmen and artisans of Turkey (TESK), Bendevi palandöken. In his opinion, such a system has caused irreparable damage to the tourism regions of the country, thriving only hotels, but all other sectors of the economy, on the contrary, are stagnating.

This is due to the fact that the tourists were hardly out of the gate hotels, afraid to miss a free lunch or dinner. And, therefore, do not spend money. So if this system continues, are unlikely to implement the government forecasts that by 2023 it wants to take in a country of 50 million foreign tourists (and the volume of resort and tourism industry to reach $ 50 billion).

Attracted by all-inclusive tourists are mostly from only two countries — Russia and Germany. While others (Italian, French, Dutch) prefer half Board, which is not that much more expensive than all inclusive. The average expenditure of foreign tourist coming to Turkey, according to estimates of the Palandöken range from $ 570 to $ 610 to spend on meals in restaurants, visits to cultural and historical places, buy Souvenirs.

The Chairman of the Confederation proposes to strengthen the work on informing of tourists arriving in Turkey: in airports and buses were stands with brochures telling about the beauty of the country. Ideas, Bendevi of Palandöken was supported by the Turkish Minister of development (something like the head of the state planning Commission) Elvan Lutfi, speaking at the III national conference on tourism in Ankara.

According to the Minister, revenues from tourism industry is disproportionately small compared to the number of incoming tourists to the country — this suggests that they are either poor or very save. The goal of the Turkish government to develop those kinds of holidays where customers traditionally pay a lot. This is a ski and health, Congress tourism, tourism for athletes of extreme sports (including rafting), Golf tourism.

And the “road map” of development of the industry, the Turkish government is ready to submit soon, said the Minister Lutfi Elvan.

Expert: Turkey still will not lose

All the recipes offered in Turkey for the development of the system “all inclusive”, it would be worthwhile to carefully study and Russian hoteliers. After all, to adopt the system plan and in Russia, as has already been stated by the head of the Federal tourism Agency Oleg Safonov. In his opinion, this will increase the competitiveness of domestic resorts in the world market. Safonov sure that the implementation of the principle of “all inclusive” is already in full swing at the black sea resorts in the Krasnodar region.

How viable such a system will be in Russia? This question “Free” press” asked the founder and head of marketing group of companies “Alekhine and Partners” the Novel Alekhine:

— There are very serious doubts that Turkey will indeed cancel the system All inclusive, because such proposals are the biggest demand. Turkish companies is simply unprofitable to change something, so all those political talks and in the end does not end there.

However, even if the system is abolished, the popularity of Turkey as a tourist destination would still remain at comparable levels.

But with regard to the implementation of the system All inclusive at Russian resorts, it is in theory possible, but will take a lot of time. After all, domestic companies need to strike a balance between the availability of services for the population and economy in the provision of the system “all inclusive”. Even if the mass will now appear on the Russian market, they will be too expensive. Therefore, the majority of Russian citizens still choose a similar proposal in Turkey simply because of the price and quality of service.