At the end of 2017, the world first heard about the Purism Librem 5 smartphone that runs on Android, but on Pure OS is a special Linux distribution. It is still in development, but now became known date of its release. 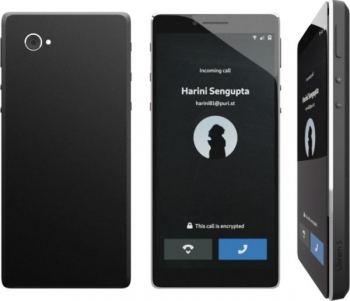 Smartphone Purism Librem 5 a year ago was not a top, and now is not, as it has only 3 GB of RAM and drive on 32 GB, and the processor model and are not disclosed. The device screen is an IPS panel of 5 inches with an unknown resolution, and even battery capacity is not reported. But the Purism Librem 5 has a USB-C port, separate entry under headphones, Bluetooth modules, GPS and Wi-Fi and a microSD slot.

The main feature of Purism Librem 5 are hardware interrupters (buttons) that are physically disable the camera, microphone and all communication modules, including GSM, 3G and LTE. This is done in order that no one can track you or secretly to eavesdrop on your conversations. In Pure OS is a desktop version – you can connect to a smartphone Purism Librem 5 mouse and keyboard along with the monitor and get a full desktop PC. The release of the phone is scheduled for April 2019, but its value at this point remains unknown.