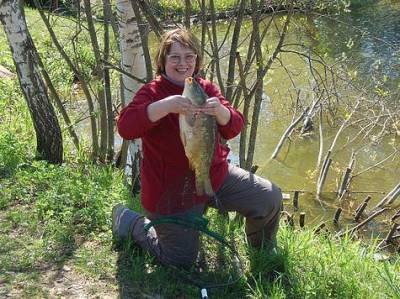 Where I read, from whom I heard the legend that the carp starts the spring feeding period with the beginning of mass flowering of dandelions, I don’t remember, maybe he invented it, but the sign works.

Dandelions is associated with another trait – their mass flowering indicates that the earth will get warm enough for planting onions.

And this coincidence is not very convenient for the angler-summer resident, but fishing and planting vegetables it is really to combine. Having a vegetable garden, and in the afternoon when the water warms up for the fish.

My first carp of the season is highly desirable, since during the winter accumulates a certain amount of cutlets of pike, fish soup perch and rockfish, and salty trout – like smoked carp.

The dish was delicious I advise you to focus on the quality of the fish. No “recipes” will not change the fish they can only hide the flavors and no more.

This time of year carp need to be with sexual products and without a layer of fat. Good fish meat is now longer white, but reddish. The paradox is that to find a paid economy with good carp not so difficult, but often have to look for it. And in hot summer time to search once. 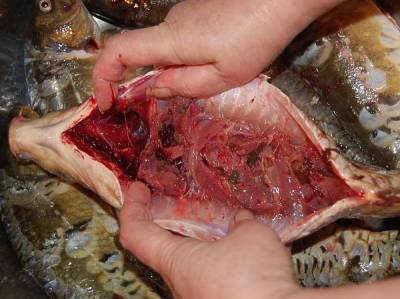 There is no fat, pure meat. Photo: Andrew Yanshevsky.

A few years ago I came to the conclusion that if exact information is not available, then you need to go to specialists, that is, in the all-Russian research Institute of Freshwater Fish Farming. They carp are bred, crossed, everything is under control, including quality. For anglers there is a separate pond, where they entertained.

I’m on the pond was a couple of years, so fished with a “clean slate”. He came to dinner, the heat, the wind and side with strong gusts.

As the fish is in the spring where the warm water and she can bite very carefully, I took a short ( seven meters ) plug, one for two with his wife. The task is not to catch fish, and catch a couple for Smoking.

As bait took a mixture of millet meal with the addition of cocoa powder, two crushed cloves of garlic and two tablespoons of sugar two pounds of bait.

Read the “Making boilies for carp with their hands”

Lure and ten minutes later started to fall, but not more, and seriki. Of pecking at all worms, corn, maggots, boiled sausage, on a piece of waffle from the Cup, which was ice cream.

Of the lures I still had the trout feed pellets and boilies floating baits with the scent of pineapple, here I’d suggest (more boylike 8×12 mm) and saved the situation. Small sturgeon have been biting much less frequently, and started to catch carp. 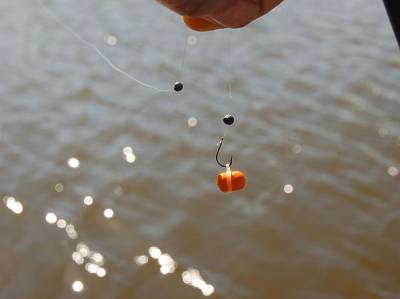 Frankly, such a careful bite I was not expecting. Carp was clearly interested in the fragrant bait, which in itself is somewhat unusual for this time of year, when the water temperature at the surface “barely” reached 15 degrees.

Had to replace the float on an even more sensitive with a capacity of 0.6 g.

To the floating lure did not raise the entire light snap to the surface of the water, I had to spend a little time to pick up a pellet, which compensates for the buoyancy of boylike. I must say that the capacity they have proved to be comparable with the ogruzka float.

Hold easy snap-in side gusty winds even with short plug proved difficult, especially the wife, so I put on the bottom okruzenu not only bait, but also half of the shipping.

Read the “Reflections from weapon bench”

But here, all ready and almost immediately after the lure is dropped into a spot of bait, the first fish over one and a half, after the sturgeon 6 kg, followed by two more ostrica 800, again sturgeon on 7 kg. 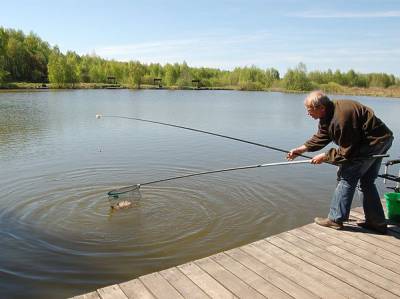 The lull between hurricane gusts of wind. Photo: Elena Egorova.

And finally – carp on the three, followed by 1.2 kg, and another one, and the completion of the “blanks”.

Sturgeon and seriki safely released. And carp not at least safely cooked and eaten.

In addition to the opening of the season of carp smoked, there was a “challenge” to work with rolikami at the plug snap. This means that on Saturday at the same time, same place, but with specialized equipment and a set of lures with the scent of garlic, strawberry, butyric acid and honey.