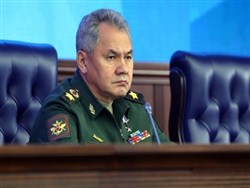 Moscow will take symmetrical measures in connection with the U.S. withdrawal from the Treaty on the elimination of intermediate and shorter-range missiles (INF Treaty) only after the U.S. side will begin to deploy new missiles in Europe and Asia. About it in interview to TV channel “Russia 24” said Russian defense Minister Sergei Shoigu, reports “Interfax”.

“Until you see it in Asia, in the Asia-Pacific region, and we’ll be there,” he added.

However, Shoigu said that Moscow is ready to continue dialogue with Washington on the intermediate-range and shorter-range. “We don’t just offer, we did open that one door, then the other. We showed its openness and transparency in all our steps and actions,” — said the head of the defense Ministry.