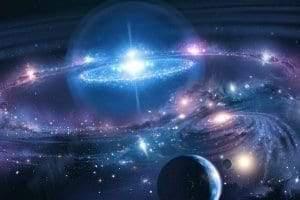 The Universe has no direction.

British scientists from University and Imperial College London have declared that the Universe has no direction, it is not stretched and is not spinning.

The scientific researchers ‘ work was published in the journal Physical Review Letters.

The calculations of scientists have shown that the chance of heterogeneity of the Universe is 1 to 121 thousand.

In the study, researchers used the maps of the cosmic microwave radiation (CMB): the light that appeared immediately after the Big Bang. With the help of maps, scientists have determined the intensity and polarization of the CMB.

Previously, scientists searched for patterns (characteristic features) on the map the CMB, which would indicate the rotation of the Universe. In the new study, they discussed a wide range of universes with defined directions and patterns that they could leave on the CMB map. The universe is rotating around one axis, for example, formed of spiral patterns, and the universe expanding at different speeds along different axes, would lead to the formation of elongated cold and hot spots.

Researchers have attempted to find similar patterns in the observed CMB maps and it turned out that no coincidence was detected, and therefore, the Universe has no directions.