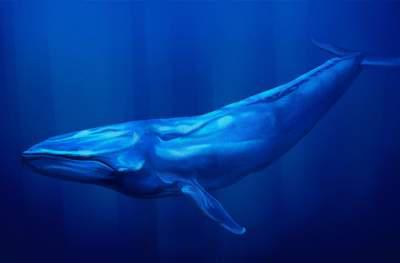 The body of the blue whale in length to the airliner, a heart the size of a car, and the language is heavy as an entire elephant. Scientists from the University of Chicago have finally figured out why this marine mammal is so huge.

The shift toward sizes larger than 10 m in length and probably originated from baleen whales only 2-3 million years ago and was due to changes in the distribution of food in the ocean. Initially, these giants weren’t so giant in comparison with other inhabitants of the ocean and was located approximately 10-m site length.

The researchers examined 63 fossil skulls of extinct baleen whales, and 13 skulls of the living. Then all the data is downloaded into a computer program to simulate the appearance, inheritance or the development of gigantism.

It turned out that the present impressive size, the whales began to acquire independently at several branches of the family tree. Over time, even large whales and now and the smallest found today are much larger than their extinct relatives.

Further analysis showed that although baleen whales gradually “expanded” for 30 million years, 450 years ago, there was a step change. They were probably caused by changes in ocean currents, by which the Northern hemisphere is now so cold. About 3 million years ago that led to the formation of “dense foci production,” which led to the evolution of whales in favor of gigantic proportions.

“The more your mouth, the more you can swallow and to spend less energy” — explain specialists. Gigantism also helps when you have to sail to the new food source.

The discovery has caused scientists concern for the fate of whales in the light of recent data about global warming, which has already had an impact on the position of the giant mammals in the oceans.