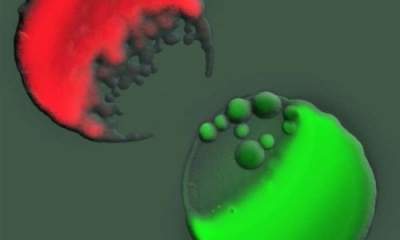 It turned out that the army of microorganisms is able to use strategic techniques.

Like animals and, to some extent, the people, the colonies of bacteria of different species quite often fighting each other. They are like a mini army, strikes, pushed back the enemies and capture territory. Some details of such “bacterial battles” known to scientists well enough, but about the tactics and strategies that bacteria use in their mini-wars, it is now known not too much.

To shed light on bacterial battles tried by scientists from Oxford University. These scientists showed that the bacteria closer together during the conflict, almost exactly repeating the actions of regular armies, responding to emerging threats in a coordinated massive attacks and counterattacks.

The researchers used two different strains of the bacteria Escherichia coli. Each of the strains was isolated a unique toxin, against which this strain had immunity, but which amazed the bacteria from the camp of the enemy. One strain was painted bright green fluorescent dye, allowing scientists to observe the course of the battle in real-time.

Observations have shown that both bacteria use the same tactical and strategic techniques. Thus, even in a colony of bacteria of a single strain is not observed uniformity, some bacteria are hyperaggressive and others more passive. In addition to these bacteria soldiers in their “army” are the scouts, which detect even small concentrations of toxin advancing enemy and quickly react to it, “informing” the rest of the colony, which begins to operate using a coordinated and quite sophisticated techniques.

It should be noted that similar studies have already been carried out in respect of certain types of animals, insects and other creatures. But these studies are the first time in the history of science when scientists have studied in detail the battles between bacterial colonies. “Our research shows that even the simplest organisms can act in a surprisingly complex way,” says Kevin foster (Kevin Foster), Professor of Oxford University, “the Behavior of bacteria was much more complicated than was previously assumed. And it is very similar to the concerted action of a collective species, honey bees and ants, for example, which are able to act as a single unit in case of alarm receipt”.

Because in human body there are a huge number of bacteria of different types, we can assume that our body is the field, which are unceasing bacterial battles. Understanding the tactics of these battles will allow scientists to better understand the principles of the spread of bacteria that can cause disease if they fall into the right place. Moreover, some scientists believe that it is possible to artificially provoke a war between one or more types of bacteria. “The war arising from the provocation that can benefit the human body” says Dr. Despoina, Mavridou (Despoina Mavridou), – “in some diseases it will help to get rid of several species of pathogenic bacteria at once, pitting them and then allowing them to mutually destroy each other”.