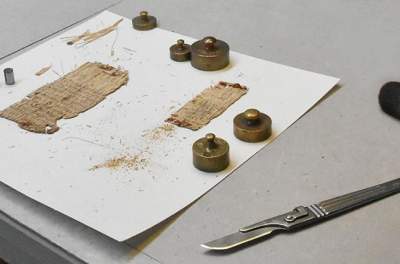 The papyrus turned out to be a medical document.

Scientists from the University of Basel were able to solve the mystery of the Basel papyrus, which was found in the XVI century and which remained a mystery to scientists.

As reported on the website of the institution, it turned out that the papyrus is a medical document most likely was written by the Roman physician Galen.

Currently in the ownership of the University of Basel are 65 different documents written in five languages, which were transferred to the establishment in the 1900s for the training of students. Basel papyrus remained a mystery to researchers, since both sides bedspreads mirrored inscription, which scientists could not decipher.

Now, researchers scanned it, ultraviolet and infrared radiation and found that it’s not one papyrus, as previously thought, but a group that was glued together. The researchers pasted leaves for the first time were able to read the text.

“This is a sensational discovery. Most of the paperwork — letters, contracts and recipes. Now the text can be read, and it is very valuable. Now we can confidently say that he is devoted to medicine and dates from the period of late antiquity. It speaks of “hysterical sleep apnea,” said Professor of ancient history Sabina, Hubner.