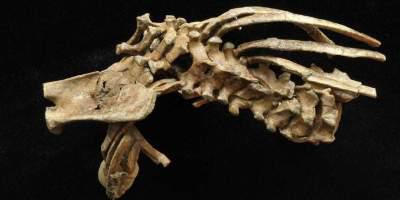 The study of the remains showed that the basic structure of the human spine has developed more than 3.3 million years ago.

An international team of scientists analyzed the remains of the ancestor of modern humans, which differ in the almost complete preservation of the spine, sternum and many ribs.

Of great importance for science are part of this almost completely preserved skeleton, e.g. the skull. However, it is the vertebrae and the ribs allowed the scientists to obtain new information about how people were able to become bipedal.

The subject of research was the skeleton of Australopithecus afarensis (Australopithecus afarensis), was found in 2000 in the area Dikika in Northern Ethiopia. The skeleton of the female, its owner at the time of death was only 2.5 years. Like other known finds of ancient people, it earned the nickname: the scientists call her popular in Ethiopia female name Villages.

To the species Australopithecus afarensis belonged to the famous Lucy. In the press Villages sometimes referred to as “baby Lucy”, but actually she’s older than Lucy, at least 120 thousand years — the skeleton of the Villages around 3.3 million years.

Studies of the remains of the Villages have been going for 16 years. The new work focuses on the spine of Australopithecus. According to the paleoanthropologist of Teresina of Alemseged (Zeresenay Alemseged), who discovered the skeleton in 2000, the “long and laborious study of the remains of the Villages shows that the basic structure of the human spine appeared more than 3.3 million years ago.”

Another important feature of the skeleton — the characteristic structure of thoracolumbar transition section, which connects the thoracic and lumbar spine. Changes (compared to the spine of the apes), which are recorded at the Villages, further enabled to switch to full bipedalism.

Today, the lumbar region bears more load. His vertebrae are extremely agile, it makes possible bends in different planes, despite slow-moving the sacrum and thoracic spine.

The remains were covered by sediments of Sandstone, so only a thorough cleaning took more than 13 years. Then the bones were studied by synchrotron microtomography.

The paper was published in the journal Proceedings of the National Academy of Sciences. Previously, scientists discovered on the territory of modern Ethiopia “neighbors” Australopithecus afarensis. The species was named Australopithecus deyiremeda: translated from one of the African languages that means “close relative”.Go to the Main page