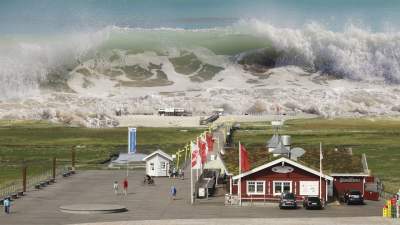 The finding has confirmed the danger of a tsunami in the future.

Previously, scientists believed that catastrophic tsunamis occur once in a hundred thousand years. However, experts from the British geological survey and the University of Dundee has criticized this theory. So the team was able to find traces of huge tsunami that happened a thousand years ago.

A giant wave of old “hid” Shetland Islands. Scientists came to this conclusion when analyzing the rocks. The sand thickness of seven inches, according to the analysis, formed in an instant. It says only one thing – tsunamis. Dark peat, in turn, overlapped for a long time.

Studies make it clear that the danger is much more serious than we now imagine. Until that time, the data geologists showed only one case of tsunami, which occurred on 8 thousand years ago.

Then a sickly wave, there was a landslide, Storegga that has occurred in the North-West of the present borders of Norway. Wave height of twenty meters was able to penetrate to 80 km inland Britain.