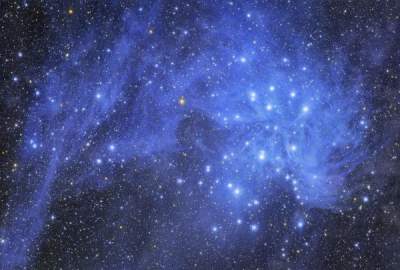 In the Pleiades around the star HD 23514 experts have discovered two exoplanets faced, very similar to Earth.

In the course of the study, astronomers drew attention to the accumulation of huge amounts of dust around the star HD 23514 in the Pleiades.

This prompted scientists to further, more detailed study of the heavenly bodies, after which the experts came to the conclusion that perhaps around the star is the emergence of a new planets that resemble Earth.

According to astronomers, the source of the formation of this dust could be a collision of space objects. However, if we consider that the age of this star has already exceeded 100 million years, it becomes clear that its planetary disk has long been destroyed, and it follows that this amount of dust was formed and accumulated for quite a long time.

Therefore, they suggested that on a cosmic scale, the collision occurred not so long ago, and soon around the star formed a new celestial body, the size of which, presumably, will be equal to the moon.