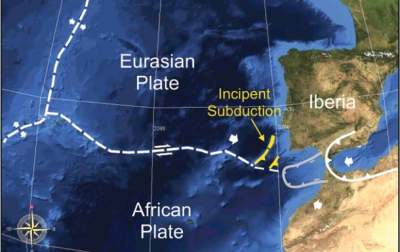 We are talking about the separation of tectonic plates.

We are talking about evidence of separation of tectonic plates on two separate layers under the ocean.

This hypothetical phenomenon of division – to the extent that experts were able to detect it by computer simulation – can be the cause of a new subduction zone where one tectonic plates of the Earth moves steadily under the other.

Marine geologist Joao Duarte from Lisbon University in Portugal for many years studied the seismic history of his native city, and in particular – the Great Lisbon earthquake of 1755: a strong catastrophic earthquake and tsunami that virtually destroyed Lisbon, killing about 100 thousand people.

Centuries later, the seismologists noted a much milder quake in 1969 in the same region, but fortunately no casualties.

And yet the strange thing is that these strong earthquakes generally occur because the region from which they emanate, is a rare, abyssal plain on the sea bottom near the Iberian Peninsula, far from any active tectonic faults.

But far beneath this flat, unremarkable landscape of the seabed, something else is going on, says Duarte: something seismic.

“The seismicity is located below the seismically quiet layer, interpreted as the serpentinization front propagating downwards through the upper mantle of the lithosphere”, – he said.

Serpentinization is a geological process in which stone structures absorb water, and, according to the researchers, this may be the reason that oceanic lithosphere off the coast of Portugal is split in two, which can lead to earthquakes.