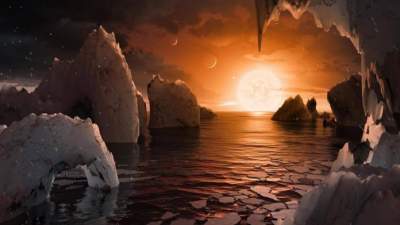 Scientists claim that previously discovered planetary system TRAPPIST-1 there are at least two planets suitable for life. This follows from the mathematical models, which built the planetary geophysicist AMI Barr, together with a team of astronomers.

According to them, 6 out of 7 planets in the system may be water in the solid or liquid state, and at least in one world may be a global ocean (who is now remembered “Interstellar” — well done).

It is also reported that the planets have elliptical orbits, which indicates AC / heating (so-called tidal heating), which triggers certain chemical processes and the movement of the layers of the mantle, forming a magnetic field and the conditions for the emergence of life.

“This is one of the main discoveries. Planet also are on eccentric orbits, egg-shaped, so every time a planet passes a star, it stretches and shrinks,” said AMI Barr.

The most suitable for the existence, judging by the models, the planet D, and E, as tidal heating them less than everyone else. However to say exactly whether they have any life impossible.

Have to wait for appropriate technology, which would allow you to send out a probe or improve performance observations so that one can clearly identify the presence of life.