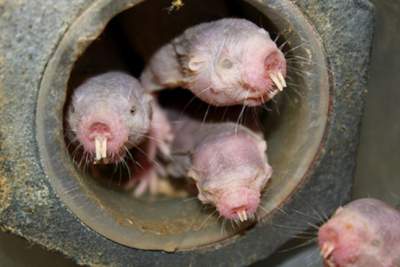 The theory, explains the causes of aging are divided into two types.

American scientists have discovered that naked mole rats, unlike humans and other animals, for life does not increase the risk of death. This suggests that the mechanism of aging is a genetic or epigenetic program and not the accumulation of random defects in DNA.

The theory, explains the causes of aging are divided into two types. First assume that in living beings are mechanisms that determine lifespan. In others, it is considered that aging is the result of accumulated over time, mutations, disruption, and deterioration of the “repair” of the systems in the cells. In this case, the risk of death should increase with age.

According to the law such as Gompertz, every eight years of life after age 30 probability of death is doubled. Biologists have analyzed changes in the level of mortality in several thousands of naked mole rats of different ages. It turned out that they such as Gompertz’s law does not obey. After reaching sexual maturity at six months, the daily risk of death almost all my life (15-30 years) continued to remain at the level of 0.01 percent. Females of the animal remains fertile even in late age.

Scientists believe that cells of naked mole rats have high activity systems, repairing DNA and chaperone proteins that maintain the correct structure of other proteins. This allows animals to accumulate genetic defects.

Researchers believe that the rodents are all the same age, but doing this is not typical. Perhaps after 20-30 years of age diggers can no longer support the repair function of the organism, which wears out quickly.