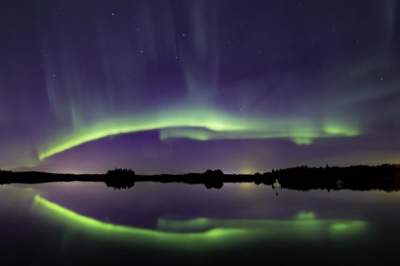 Arriving to Earth magnetic field of the Sun can point in different directions.

Fascinating physical phenomenon occurring at both poles of the Earth, in fact, is a mirror reflection of each other. Due to the similar features of Aurora scientists for a long time did not notice the difference in the auroras at the North and South poles.

But later they finally managed to notice that at the poles the lights differ in length, color and even shape. As it was established professionals from the American geophysical Union, the difference between the Northern and southern auroras depends on the pressure at the magnetic tail of the Earth. Magnetic tail of the Earth is constantly compressed unevenly due to the impact of solar winds and magnetic fields of the Sun.

Previously it was assumed that the asymmetry in the auroras is due to the “reconnection” of the tail to the Ground, but we now know that “reconnect” on the contrary reduces it. But now scientists explain that arriving at the Earth the magnetic field of the Sun can point in different directions.

For example, if it points in the direction of “East-West”, it interacts differently with the magnetic field of the Earth at the poles, which causes the difference. So the lights are always different and no one can be the same, even when occurring simultaneously glow.