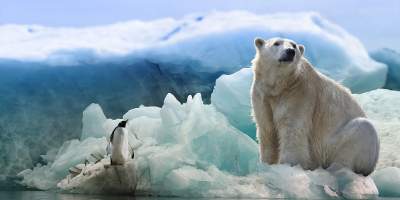 The diversity of species in nature, generally increases as it moves to warmer latitudes. In the new study, the researchers examined a curious exception to this rule: diversity is increasing among the warm-blooded marine predators such as whales, seals and penguins in the cold waters.

In the study, the results of which are published in the journal Science, the staff of the University of Michigan under the guidance of John Grady (John Grady) found that cold water slows the metabolism of fish and sharks, contributing to their “sluggish” behavior, providing mammals and birds are an important hunting and competitive advantages. In other words, the sharks are easier to escape, and the fish are easier to catch when the water is cold. The researchers confirmed their hunch that warm-blooded predators prefer to hunt where the prey is slow, lame and cold.

“We live in an era of rapid environmental change and loss of biodiversity. The understanding of the mechanisms that led to the current spatial distribution of species is critical to preserve it for future generations,” say the authors.

In the study, researchers developed a system which was used for the quantitative evaluation and generalization of the geographical distribution almost a thousand species of sharks, fish, reptiles, mammals and birds. The analysis of these data showed that a warm-blooded marine predators such as seals, whales and penguins, do not follow the typical geographical scheme, the increase in biodiversity near the tropics. It turned out that the diversity of these predators is systematically increasing towards the poles relative to their cold-blooded competitors, such as large sharks and other fish. According to scientists, this curious fact led to the development of the theory presented in the article, which explains patterns of biodiversity given the relative speeds of predators pursuing their prey at different temperatures of water.

Scientists found evidence supporting this hypothesis, in the study of food habits among warm-blooded seals and active hunting of cetaceans (including dolphins, porpoises, belugas and narwhals).

“Analyzing the global structure of the number and consumption of marine mammals, we find that the seals and dolphins together consume about 80 times more food available close to the polar seas, than at the warmer equator. This will help to explain why these warm-blooded predators are more numerous and varied in the cold seas,” concludes Grady.