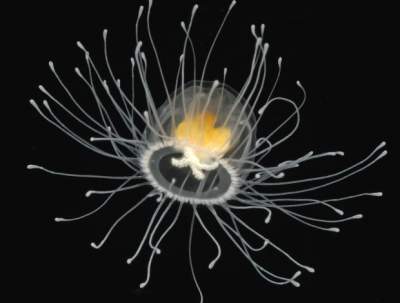 Found a creature that constantly change your body.

As you know, the life cycle of any being starts with birth and ends with death. However, recently a group of biologists from the US was openly animal that can live forever.

So, the only immortal animal in the world was the jellyfish Turritopsis nutricula. She lives in the depths of tropical seas and has quite small size – about 3-5 millimeters.

It is noteworthy that this sea creature could in a certain period to rejuvenate itself. Medusa falls to the seabed, then covered with a chitinous crust. Then it becomes a polyp. Under a layer of chitin of all the cells of the jellyfish is completely updated and it goes into the initial phase of its development.

Further updated Medusa struggles out from under the chitinous layer and continues its life cycle until, until you grow old. After this rejuvenation process occurs again, and so an infinite number of times.

Now researchers are actively studying this phenomenon. It is assumed that the Turritopsis nutricula can control your genes by influencing the process of formation of new cells. But this is how she “turns back time” is not yet known.

It is worth noting that if scientists can figure out how this process works, we can expect really interesting discoveries, aimed at the fight against aging and in the development of regenerative medicine.