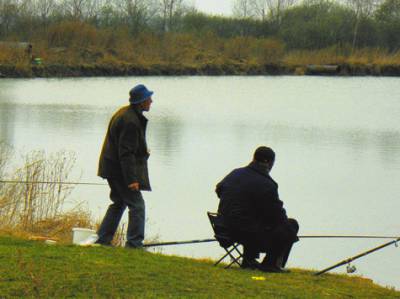 However, residents blocked her dam. And formed a pond, a shallow, rather narrow, but the chosen people – bathers and fishermen.

Look on the left near a Bush men carp compete one-by-one is peering into the distance, said Tatiana. I looked where she showed and clearly saw flapping by rods of fishermen.

Not lazy, went to him and found out that shore caught a small white carp, but very prevent grass and weeds rise from the bottom by leaps and bounds. And then, 40 or 50 meters, it is possible to catch and “majors” of a man’s hand, and even more. “I’ll feed you fresh fish,” I promised, returning to his wife. And about this I had the idea to sail beyond the algae and reeds.

Read the “Fishing in the heat”

After returning home, I pulled out from the far corner of the shed a piece of foam large size: 1.5 m in length, about a meter in width and a minimum thickness of 10 cm It was very tight, and I’ve had to sweat blood until I cut it into two long pieces.

The idea, I admit, was not mine. Remembered water skis from a magazine like “DIY!”.

Picking up the workpiece, I pull up to the lake and conducted the first test: undressed, went into the water and lay on the bonded tape half. The weight of my body the material passed. I separated the design and attach both legs to the halves of the foam, tried to move through the water. But my future skis or slithered sideways, or I was losing my balance and falling down.

“If you put on top of the skis, even a couple of wooden hinges on the bolts, my raft-taktik has a right to exist and use”, – concluded to myself. And so they did.

In addition, the front cut the corners on skiing, spearheaded. And below about 45 degrees lifted the chamfer. And yet, not only turtle steps to move through the water, but to start from the bottom of the sixth, I drilled additional holes in the foam and came up with simple stoppers to hinges.

Now at will, on the basis of the aquatic environment, I could choose the way to travel: slow – moving feet on the water, and a little faster – starting from the bottom of the sixth between the two slopes, or working with your hands fanerku.

The two skis I attached with screws chuni, it is clear why. Found pound iron weight with twine for the anchor and a simple collapsible bench for sitting.

I was pleased with created by the child. Tatiana, casting a glance design, said with a smile: “Well, wait for the carp and go for the sour cream. And you be careful, angler, don’t drown!”.

The next morning, as soon as day dawned, I Packed up and moved to the lake. Everything turned out wonderfully.

Not to become a turtle, I put the ski in the form of a raft, sat on the bench, fastened the grooves of the ski, and, proceeding sixth (old a three-rod), went to the chosen place for the reeds.

The morning was cloudy, but windless. It was 15 degrees, and felt that the afternoon sun will scorch. But steam I did not want and I had planned to spend on the pond just five hours.

At first bite it doesn’t matter you can see, the fish still tasted the dressing. But half an hour later it’s gone. Carp really bite big. Not deceived fisherwoman!

Three hours later my tank was full. I waited for the final bite and decided to wrap it up. But the larger carp were caught, and besides, he’s off the hook when I wanted to take him in hand.

A shame! He got me all steamed up and I moved to a neighboring passage in the reeds. The water was empty, and on the shore through a light haze I took the tent and a dark spot of an extinct fire. I turned my head to the center of the lake and frozen with the hope of success.

15 minutes from the tent was heard loudly: “Look, the Ghost at the lake! Frozen, like a fisherman, and relies on the water!”. “Come for a walk – he replied voice rough, is stuffed some twisted up.”

I immediately realized that the guys that was a good evening and take me God knows whom. My raft was agregen in the water, and the impression that I do not understand how to stick to the surface.

I decided to cast them. The bait quietly gathered, slowly turned to the shore, head down to the knees, and that was power loud howl and clapped hands alternately between the ski raft, approaching the tent. I thought the men immediately understand the joke, and I’ll wait for cooling my ardor phrase. But it turned out otherwise.

“Hey, dad! It’s not a dummy, but the water damn! Go tearing-ass out of here!” That was the last I heard.

Read the material “How should a knife adventurer”

I laughed. I got out on the grass and looked around. No one was around. Near the tent lay empty containers with a capacity of 0,75, the fire was barely smoldering, and a little further was a pair of bikes.

“What do you walk on water and howling like a wolf?” – there was left in the grass. “That’s it!” – echoed voice rang out from the bushes.

“Guys, Yes you che, henbane overeat? I was kidding, but on a raft of carp caught.”

Soon I was approached by a father and son who are simple country folk. They arrived last night, cooked potatoes, then a little, and talked all the evening dawn until dark. Decided early carp to catch.

“Oh! What’s your crafty boat-submarine,” said the old one. “Yes, that’s my machine, heavier than air but lighter than water, which you issued half asleep didn’t notice.”

“You raised such a fuss that we got for the Witcher adopted.”

“Well, you’ll have to forgive me, for God’s sake, these grisly. My fishing is over, and I wish you nor tail, nor scales!” On that note, goodbye.

I quickly disassembled the raft, sealed it with duct tape and hurried to the house, carrying a carp, and he thought, “Well, not with the hunters was joking, you could have to obtain a doublet because of his foolishness.”