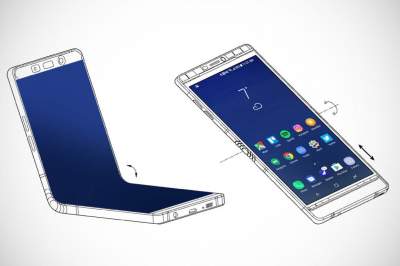 The new smartphone will flexible.

Before the official announcement of the flagship smartphone Galaxy S9 is still a whole month, but now about the future novelty known literally everything from its technical equipment and finishing the features of appearance. However, all perfectly understand that the new flagship of Samsung will not be able to “break” the iPhone X because it will not be anything truly revolutionary. However, the South Korean company in 2018 is going to bet on a completely different phone, which is the Galaxy X.

This year Samsung will release three flagship – Galaxy S9 Galaxy Note Galaxy 9 and X. the Latter will be quite new to her mobile device, and its main feature will be a flexible body, screen and other components. This new smartphone is top level should be the most innovative smartphone in 2018, which no one can do anything to stop.

A few hours ago Samsung posted a free access information about the results of the fourth quarter of 2017, while at the same time and told some details about the revolutionary smartphone Galaxy X. In the text, published on the official website, clearly States that in 2018, the South Korean company will focus on smartphones with advanced technologies, including models with a folding OLED screen.

In other words, the South Korean Samsung Corporation on the entire world announced that in 2018 the market will be released Galaxy X, which will receive a foldable AMOLED screen, can be folded in half. A technological solution will definitely be a major innovation in the current year, provided, however, that Samsung managed to make a really cool phone top level, and not some poor excuse, like ZTE Axon M.

Even the most advanced smartphone Samsung has already created its official announcement will take place only in the second half of 2018, as now, according to information from a number of sources, the South Korean company is actively working on software for it. It is obvious that the Galaxy X times better Galaxy S9 iPhone X, but its price tag may be obscenely high – up to $1100 for the base model.