Flagship smartphone Samsung Galaxy S9 was released in two versions – with Qualcomm 845 for USA and Samsung 9810 for other regions. Both give about the same CPU performance in benchmarks, however, as it turned out, the autonomy of the mobile phones on these chips varies greatly. 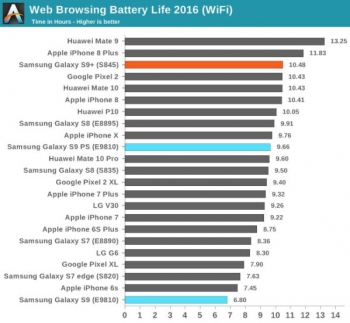 As studies have shown, the new Samsung Galaxy S9 on the 9810 works without charging significantly less in comparison with analog 845-m Snapdragon from Qualcomm – all results given in the attached table. The authors of the comparative test can’t tell yet what exactly lies the problem S9 on the 9810, but the difference in battery life is significant. Perhaps in the future it will recover with new firmware, or the problem is hidden in the hardware stuffing, and fix it so just does not work.

We will add that in our country Samsung Galaxy S9 is also sold with processor Samsung 9810, and the models on Qualcomm must be ordered from the USA. The smartphone is in Russia 60 000 and offers 4GB RAM, 64GB ROM screen 5.8 inch Quad HD+ Super AMOLED and a single main camera is endowed with adjustable aperture for shooting in low light.