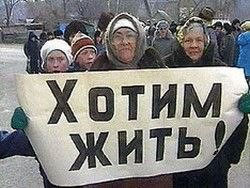 85-year-old man shaves every day: razor dry scratchy skin, but the old man pays no attention to this, and looking at myself in the mirror, thinks he has the right to die – he lives with his son, almost retirement age, the unemployed and unprofitable, unable to start a family; son, received a good Soviet education, once worked as an engineer, but the factory collapsed, and all attempts to find a new job without success.

The old man himself, despite his age, relatively fit into modernity, about which it is better not to think: he sells supplements thank you health allows you to move around the city, he sells and cosmetics associated with firm living network marketing; and, while he shaved in the morning and looking at his reflection, he knows what you need him to live up to the time when the son will retire, will have at least some, albeit a tiny income. Son at this time is cooking the oatmeal in the kitchen, or preparing scrambled eggs for two.

A few months ago they buried mother, who died suddenly of a heart attack; an old man lived with his wife of more than half a century, and the colorful ribbon of life sweeps sometimes in the head, dying at that particular moment…
— Dad, Breakfast is ready! – hears the old man.
— Yes, son, go…

He has a good, affectionate boy, why didn’t it work with your family? With the children?
They have Breakfast in the kitchen, both eating too much, and he recalls a funny, well-learned boy, and endeavor to make out his features in the current, too, is the old man sitting opposite.

— Where are you going today? asks the son.

— The warehouse is necessary. Then go to two addresses. Another wrap for the supplements.

Just in case, to stock, son. And you?

Father knows clearly that it won’t happen, lots of times it was, but why? Can’t answer.
They’re going, and dad does it quickly, not grunting, not busy exactly in his body there is no sickness, no failures; the son of longer – he knows that his way is in vain that you have to come back empty-handed, well is a household — time flows faster when doing…

Potato then buy, son. And milk. Money on the dresser, under the vase.

The old man tightens the vortex of the movement: colorful, buzzing, ever flowing lava people underground; a brief proselki of darkness and new influxes of light output at a specific station.

Upstairs, Moscow, old, alley-yard, and houses of the fifties, standing the peace, organize the space of the courtyard – this quiet, cozy.

In one of them – a warehouse of the company, trading in cosmetics, where the man receives the item, and even to chat with the women to give him…

Then again the deep underground, again, the noisy traffic, the necessary meetings: one on the enterprise-a profile of the old man is not clear, but young women, for a long time knowing him, eager to take the product and the money is so needed, so needed…
Will continue to curl the way: on the streetcar and passing by boxes of high-rise buildings, prominy green – continued summer heat and sun in September – yards, flashing the variety of playgrounds.

The old man gives place, he sits at the window, looking at Moscow, and the memories are flowing parallel to the track.

He thinks that memories are not wealth, because if they are good, I want to go back in time, and if thin, endeavoring to forget, but nothing happens.

And still they go: nowhere to go – he recalls a wife, and a half-century of life with her, how I raised the kid, mostly delighted; it seemed to him now that his wife never swore, lived perfectly, and the thought that comes to mind — well, that was the first to die, for if he died, man, there was no one to get the money, and the wife retired was penny — not blasphemous, not true.

An old man comes near the old, red brick factory, long since transformed into a diverse market place, moving, getting out of the country memories along its walls, collapses in the yard…
He needs to be in a fairly affluent apartment where the client lives: an elderly aunt who buy usually have a lot of different tubes and bottles of all varieties and names which he, in the past the engineer had to remember…
Trip son the firm fails: he is not waiting for anything else: who in this age will take to work.

The son goes to the store and buying potatoes, milk, bread; then – very slowly – back home.
He thinks of his mother, beloved, precious Mama, and memories mostly revolve around childhood; and then, an older, much battered life of a person, involuntarily smiling…

He recalls two of his serious novel, both, it seemed, would have to end logically, but broke something in the fate, stalled its movement, and that he was single, without children, who wanted so much with her father.
He sighs, says to himself: I’m not single, I am a father, and a murky brew of thoughts, rises to the fifth floor of the house in which he lived all his life, taken for cleaning, cooking food.
…in the evening, sometimes the old man comes into the Church – an old, massive, bright red, more like a fortress, it is not far from home.

He goes, not realizing the heap of rites, rituals, not believing really; he comes, just feeling the need for at least some support; and the icon of Jesus Christ, putting a candle in your own words, never knew of the prayers of the people, crumpled thanks that health still allows you to move actively, to make money, and asks that the death did not come before the son will get a pension…