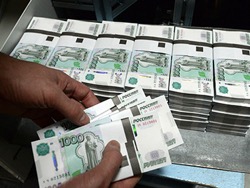 The Ministry of Finance reported on the exhaustion of the Reserve Fund. The last trillion was spent in December of last year to cover the Federal budget deficit. This year, Russia is only the national welfare Fund. It at the beginning of the year, there were 3,753 trillion roubles, but in “real money” of that amount accounted for about half. However, high oil prices give chance to replenish reserves. But purchase of foreign currency by the Finance Ministry may lead to the weakening of the ruble.

The Ministry of Finance of Russia has told about results of placement of means of Reserve Fund and national welfare Fund for the period from 1 January to 31 December 2017. According to the Ministry, in December 2017 balances of the Reserve Fund in foreign currency accounts in Bank of Russia ($7.62 billion, of 6.71 billion euros and 1.10 billion pounds) were sold by the Treasury for 1 trillion rubles in full and used to cover the Federal budget deficit.

In January-November last year the deficit amounted to 532,4 billion rubles, But, according to tradition, on December accounted for the biggest expenditure, so the total deficit will rise considerably. According to the forecast of the Minister of Finance Anton Siluanov, the budget deficit in 2017 of about 1.5 trillion rubles, or 1.6% of GDP.

After the December transactions “in the accounts of the Reserve Fund formed zero balances,” and from 1 February 2018, he will cease to exist, says the Agency. According to the adopted in June last year the decision of the Reserve Fund joins the national welfare Fund (NWF).

According to the Finance Ministry, on January 1, 2018, the NWF amounted to 3,753 trillion rubles, equivalent to $65,15 billion, But of this amount in separate accounts to record funds of the NWF in the Bank of Russia placed only $to 15.65 billion, 15,14 billion euros and a 3.36 billion pounds. That is real money to FNB about 2 trillion rubles.

NWF on January 1, 2018, according to the forecast of the Minister of Finance Anton Siluanov, was to be 3.7 trillion rubles, and its liquid part is 2.3 trillion rubles.

“The exhaustion of the Reserve Fund is a formality related to the fact that instead of the two funds will now be one of the NWF. Although, to be honest, and FNB will now be only one name.

Previously, he was really a Fund where you set aside money for structural reforms at some future projects that were supposed to change the social and economic condition of the country through conversion, and now it’s just a Fund receiving money at the expense of exceeding the estimated price of oil and guide them to Finance the budget deficit. That is, it can be called a bag of money for a “rainy day” and for some target programs, the reform has no relations”, — said the analyst of “ALOR broker” Alexey Antonov

The former first Deputy Chairman of the Central Bank Oleg Vyugin said “Газете.Ru” that the exhaustion of the Reserve there are both pluses and minuses. Plus the fact that it is “disciplinary” the Ministry of Finance, because he will not be able to “scrape” the money from the capsule, and the budget will be adopted with certainty. Negative — if negative consequences will be virtually no “cushion”.

At the current rate of oil exhaustion of the Reserve does not threaten, says Artem Deev, senior analyst at Amarkets.

But as oil starts to fall to a critical level of $40 per barrel, the reserves can be depleted and will require the devaluation of the ruble.

But this year due to high oil prices, reserves must be replenished. From 1 January 2018 in Russia begins to act a new fiscal rule. According to him, the base price of oil is $40 per barrel of Russian Urals oil prices in 2017 (each year this value will be indexed at 2%). The excess amount will be to replenish reserves. The Finance Ministry will buy foreign currency in the market of rouble in the amount of additional revenues.

Anton Siluanov said that the volume of currency purchases by the Finance Ministry on the domestic market will be in 2018 2 trillion, with an average annual price of oil at $54-$55.

“At the price of $54-$55 per barrel it will be about 2 trillion rubles of additional oil and gas revenues. Will even cover those expenses reserves, which at us in the next year provided,” — said the Minister.

He also stressed that if the average oil price of $60, the Agency will acquire currency at 2.8 trillion rubles.

Georgiy Vaschenko, head of operations on the Russian stock market IR “freedom Finance” says that the Finance Ministry is soon to publish the plan and calculations for replenishment of the reserves, the preliminary estimate is in the range of $38-50 billion in 2018, provided that oil will cost $55-60 per barrel for Russian Urals oil.

Last year, the Finance Ministry bought currency to 830 billion rubles. These funds are not yet enrolled in the SWF.

Currency market analysts believe that the operations of the Ministry of Finance will put pressure on the ruble, and predict his decline against the U.S. dollar and the Euro.

“The regulator plans to fully redeem free currency and thereby eliminate the balance of payments surplus that will actually put an end to the further strengthening of the ruble”, — says Mikhail Mashchenko, an analyst with the social network for investors eToro in Russia and the CIS.