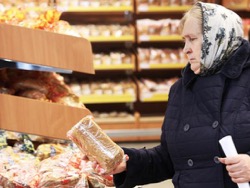 Russia in the current year raised a record crop of 130 million tons of grain. The quality of the bread, which is eaten by the Russians, has been steadily falling. The bread shelves in the shops are full of fake, which is sometimes hazardous to health. This is evidenced by the research Agency “Roskoshestvo” independent laboratory “Roskontrol”.

What is better: bread or crispbread?

Each year the average Russian consumes almost 130 pounds of bread (in recalculation on flour). And just what varieties of bread today you will not see on the shelves. Typically, they advertise as “healthy” food is, for example, unleavened bread, which is baked without the use of bakery yeast. It differs from the yeast greater hardness and fewer air bubbles in the bread.

There are still a great many dietary bakery products: salt-free bread, bread with low acidity, low in carbohydrates, with added lecithin with a high content of iodine…

There are more branny bread which is prepared with the addition of coarse shells of whole grains rich in fiber (it is necessary for good digestion and the condition of the intestinal microflora).

Whole wheat bread is made from grains, completely kept their shell — they hold the largest supply of vitamins.

Those who really “turned” on their own health, refuse bread in favor of bread — it is believed that they are lower in calories, richer in B vitamins, minerals and dietary fibre (cellulose).

Only be sure to read the label that they were made with whole grains and with a minimum of additives. And, as shown by a recent study of the laboratory “Roskontrol”: the producers of most varieties of bread openly deceive the buyer. On the labels they underestimate (sometimes several times) information on the content of fat, protein and fiber.

As make a fool of us in the mini-bakeries

Much more expensive than “regular” bread is stored virtually indefinitely (for example, toast or burgers). But you understand that such “valuable” qualities — not from natural ingredients, and from chemical improvers and preservatives.

And use them in baking industry a huge amount of: enzymes, organic acids, starches… Often used them to artificially increase the quality of the flour, which initially has a low class.

When baking bread use and harmful TRANS fatty acids (TRANS fats). “Richer” in just their sweet pastries — puffs, cupcakes, muffins, cheesecakes, pies. In no case can not buy children!

Also is a way to bypass the mini-bakery: bread served here sometimes directly “in front” of the buyer — a fast, beautiful and expensive. But actually it’s a marketing bait: with such a small production volume once the Baker to wait until after the required fermentation process and the dough will rise — and thus to speed up the process it uses all kinds of chemical additives.

Recently, the Agency “Roskoshestvo” reviewed the quality of bread, which showed that every fifth loaf in the stores does not meet quality requirements. Researched breads (sliced loaf) 65 brands, of which 12 rejected.

Many samples were low mass fraction of fat and protein (which may be associated with low quality flour) or, on the contrary, too high content of preservative (sorbic acid). Preservatives inhibit the microflora in the gastrointestinal tract of man, therefore is undesirable for health. And manufacturers use them to increase the shelf life of bread, “suppressing” mold or bacterial “potato disease.” Some loaves experts “Roccasecca” even found harmful bacteria.

The study of bread quality, which is sold in Russia, regularly conducts independent laboratory “Roskontrol”. So, in 2015, experts pointed out that hardly probable not the most frequent disturbance is the excessive salt content in bread (it is added to make the crumb denser).

As a rule, in wheat bread high percentage of humidity (because of violation of technology of preparation and formulation) and this may affect the shelf life of bread and the possibility of occurrence and development of bacteria. Yes, and often indicated on the marking weight of the bread may not have anything to do with the stated — it is much lower.

It is important to note that many bakery products not manufactured according to GOST and technical conditions (developed by the manufacturer). And it is actually consumer fraud, often because such “bread” is actually made of imported frozen food and real bread made by classical technology, has absolutely nothing to do!

And used in the manufacture of semi-finished products improvers and leavening agents can be banned in Russia, but to know their true composition is unrealistic because foreign suppliers of his hide.

Was, for example, that sold under the brand “Grain” bread so often is not — it just does not meet state standards. In addition to whole grain it contains flour: wheat flour and rye flour. That is again a banal deception of the buyer!

How much is the “imitation” of bread?

Russia in the current year raised a record crop of 130 million tons of grain. The quality of the bread, which is eaten by the Russians, has been steadily falling. Why is this happening? This question “Free press” addressed to our resident expert on food security, former rector of the Moscow state University of food production (MGUPP), Professor Dmitry Edeleva.

— Unfortunately increasingly in our country, we meet with facts of production of bread using flour from durum wheat. That is, one which is used for technical purposes and are used for animal feed.

Wheat according to GOST is divided into 5 classes depending on the content in grain protein, additives, residues of fertilizers and pesticides, salts of heavy metals, mercury, lead and some other properties. The law stipulates that wheat from 1st to 4th class is used in the food industry. And 5th grade (feed wheat) is animal feed and other industrial purposes. Wheat 5 class-the cheapest flour is the most cost-effective, the price of the product low and the quality of “bestial bread” is appropriate. This is one of the reasons for the decline in the quality of bread in Russia in recent years.

Such “gray” flour, feed grains, mainly produce mill working “quasi-legally” and selling the flour to small producers. Knowing that the production of flour from feed technical and of wheat, unfit for human consumption, it is highly harmful for the consumer, does not stop unscrupulous manufacturers.

“SP”: — Use in bread making “beastly” grain is, in your opinion, the main reason now is so low the quality of bakery products?

— The fact that the use of flour from low-quality grain requires all sorts of modifiers, many of which are not harmless to health.

As an example. A true Allergy to bread has only 1% of our citizens, and another 9% is allergic to flowers and other inedible components malosedobnaya and bad flour.

“SP”: — in any city on every corner you can meet a mini-bakery. Bread promise this helpful, “home”, corn…

— It’s all true! Sponge bread from good flour is useful and recommended by doctors, it is rich in vitamins and biologically active substances. But the imitation bread is made by accelerated technology, gives dummies, often externally difficult to distinguish from bread baked according to traditional technology. But it’s ersatz, say, fast food-bread.

— Choosing the bread, remember that the quality of the bread looks Golden, pusateri, soft and supple, cut without crumbs. This bread smells throughout the apartment and does not deteriorate 4-5 days. And bread of coarse grain and technical flat, unsightly, perishable, Crosley.