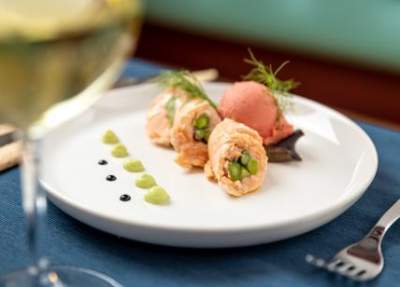 “Gelato d’essai” – the world’s first restaurant where ice cream is served in combination with pulled pork or grilled sausages.

The original and revolutionary idea to open a restaurant ice cream was born ice cream producers, Jeppe Sferra and Alessio Schioppa in collaboration with chef Marco Mezzaroma. Dieppe, Sferra worked for many years as a graphic designer, but realized the dream of opening your own ice cream shop in 2011; he called it “Strawberry Fields” and worked in the heart of the Colli Aniene in Rome.

But the passion for ice cream and the desire to experiment made him to invent something completely new. After three years of confrontation and ideological experiments, the three organizers of this unusual restaurant was realized that ice cream goes well with everything from braised pork to grilled sea bass.

A striking combination, but in perfect harmony with each other – the result of hard work and careful balance of flavors. “The most difficult task was to determine the ideal combination of hot and cold to heat shock had no effect on the taste buds,” explains Sferra Dieppe.

“Ice – cream- the product for which I feel a deep passion,” he continues, ” for too long been trapped in a cultural cage which took him to a single category of desserts. It suffered from injustice, and it is very unfortunate that people still do not understand the complexity of its taste.”

The first ice cream restaurant in the world located on the street via tor de Schiavi, 295, in the pedestrian gallery in the district of Centocelle in Rome.

Sferra, Dieppe looking forward to the opportunity to welcome its most curious customer in search of new culinary emotions in his new restaurant.