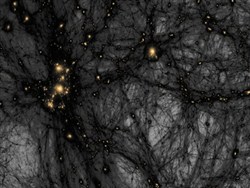 Scientists at Johns Hopkins University suggested that dark matter could exist in the form of unknown particles for fractions of a second before the Big Bang. This publication reports Science Alert.

According to the researchers, the hypothesis can explain the mechanism of the Big Bang. According to a widely accepted model in the first 10 to the minus 36th of a second extent of the Universe inflation happened, that is the exponential expansion of space. However, in the new work assumes that the Big Bang should be called the conditions existing at the end of inflation.

If we assume that dark matter was created after the Big Bang, then physicists would have found it in experiments with particle accelerators. Instead, dark matter could exist in the form of scalar particles with zero spin, which in large numbers appeared during inflation. Their presence can be detected by astronomical observations.

It is still unknown what constitutes dark matter, and it is one of the major unsolved problems of modern physics. It is believed that it may include difficult to detect objects of ordinary matter, as well as undiscovered elementary particles. In the latter case, the dark matter interacts with ordinary, baryonic, matter only through gravitational forces.