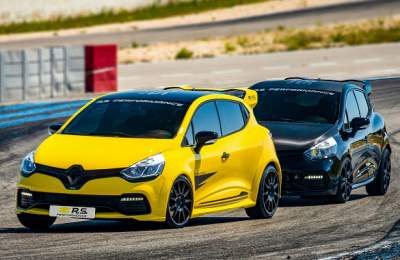 A division of Renault Sport have prepared a whole range of improvements for the “hot” hatchback Clio RS. It includes both components for a sportier drive, and clean design accessories.

In a directory that is already available on the website of Renault Sport, there are a number of parts for Amateur athletes who exploit their Clio on track days. For example, racing seats with by carbon fiber frame, brakes, increased power, track suspension, exhaust system, strut suspension between the supports, and much more.

Among the stylistic improvements – aerodynamic kit in the spirit of the concept car Clio R. S. 16. It consists of the front wheel arches and large rear wing. The plumage will be released in limited edition – only 250 copies. In addition, the directory includes a multi-plate wheels Turini black or red, and a hood of carbon fiber.

Renault Clio RS fourth generation is equipped with a 1.6 turbo engine capacity of 200 horsepower and a seven-step “robot” with two clutches. Acceleration to 100 kilometres per hour occupies from such car 6.7 seconds. There is a more radical version of the Trophy with a 220-horsepower engine. However, it seems that production of the Clio RS is now minimized with European sites Renault model disappeared, although the usual hatchbacks and station wagons Clio offered.

Soon improvements from Renault Sport will be offered to other RS-models of Renault. However, now the model range of the French firm only one such car is a hatchback Megane RS.