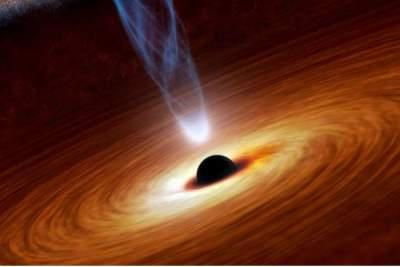 A singularity is formed when a massive star begins to shrink because of the powerful gravitational attraction.

Under certain conditions, the event horizon may disappear (for example, if the black hole is massive and fast rotating), so the singularity is available for observation. In this case, it’s called naked. However, physicists Roger Penrose and Stephen Hawking have suggested that the laws of physics forbid the existence of naked singularities. The event horizon needs to “protect” an external observer of the violation of physical laws at the center of a black hole. This is because no information can get out, because she will need to drive faster than the speed of light.

“The principle of cosmic censorship” is violated in a space that has a spatial dimension, which number more than three. However, in the new study, researchers have simulated the conditions under which naked singularities can exist in a three dimensional Universe. It turned out that the latter should be bent in a special way, acquiring a saddle shape. Such a space is called antidestruction.

Stephen Hawking is known for his work on cosmology and science popularisation. He studies the problems of origin and evolution of black holes and of cosmological singularity — the initial state of the Universe from which the Big Bang theory, is constantly expanding. In 1963, when he was 22 years old, doctors diagnosed him with amyotrophic lateral sclerosis. Despite his illness, Hawking has continued to do science, he was twice married and has three children.