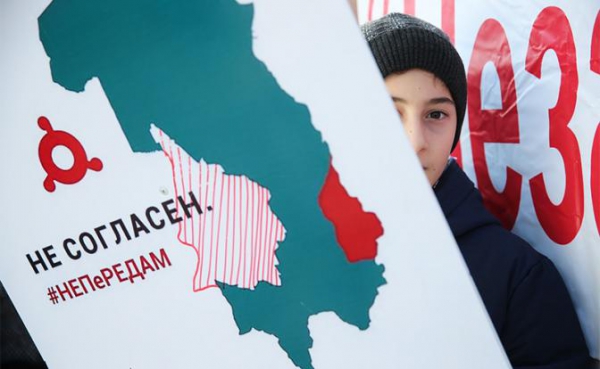 The Ingush authorities for the third month continued harassment of local opposition. This has led to radicalization of youth: louder in the region there are separatist calls for the revision of the borders. Once it was over Ossetian-Ingush war.

Mass protests in Ingushetia began in September 2018 after the head of the Republic Yunus-Bek Yevkurov and Chechen leader Ramzan Kadyrov is behind closed doors, signed the agreement on the exchange of territories. The protesters camped in the Central square of Magas, but the crowded stage and the rally ended peacefully.

With new energy protests in Ingushetia erupted two months ago after Yevkurov has tried to adopt amendments to the law “On referendum”. 26-27 March in the center of Magas held an unauthorized rally to demand the resignation of Yunus-Bek Yevkurov and the dissolution of Parliament — it turned into a mass brawl with soldiers of Regardie.

After this was dismissed by the Minister of internal Affairs of the Republic Dmitry cava, who refused to give the order to disperse the protesters. Were detained about 70 participants, all of them were subjected to administrative arrest. And after criminal case about mass riots and assaulting law enforcement officers — defendants are added to this day. So, may 21, in the framework of the “Ingush case” was arrested a resident of the Sunzha Aslan Aushev. He became the 26th on account of the accused…

It is significant that all the activists contain outside the Republic — Nalchik and Vladikavkaz.

Yevkurov defenders did not listen

“Ingush” the protests have gone beyond the borders of the Republic and even Russia. For example, one of the alleged organizers of the unsanctioned rally, Ahmed Pogorov (by the way, the former Minister of internal Affairs of Ingushetia) declared in the international search: the other day in the house of his relatives in Karabulak were searched.

Another activist, the head of public organization “the Choice of Ingushetia” Ismail Nalgiev was on may holidays detained by customs officials in Minsk. At the request of Russia, where he declared the Federal wanted list, Nalgiev was expelled from Belarus in our country.

Naturally, the party could not remain to the West over the last two months in Brussels, Helsinki, Stockholm, Hamburg representatives of the Ingush Diaspora held protest rallies. Demanded to stop repressions against the opposition.

The same appeal to the authorities of Ingushetia and Russia on may 17, the Board adopted the “Civil society forum EU — Russia” (it is a coalition of human rights NGOs from different countries). In Ingushetia at the invitation of local Ombudsman Jambulat Ozdoev arrived a few known human rights activists from “Memorial” “Civil assistance”, Moscow Helsinki group…

Twice they met Yevkurov himself and gave him the address in which warned: arrests, searches and mass persecution of the opposition will not lead to anything good.

“The opposition, largely decapitated by the arrests of leaders, will only be radicalized, which will impact primarily on youth,” wrote human rights defenders Yevkurov. In the end it turned out to be — adequate opposition came the radicals and provocateurs.

Table mountain as a reason for discord

The new “hot spot” on the map of the North Caucasus was the Prigorodny district of North Ossetia, disputes about the ownership which is the cause of the Ossetian-Ingush war in 1992. And for thirty years periodically there are calls to return to Ingushetia, Prigorodny district — and at the same time part of the Pravoberezhny district and Vladikavkaz (up to the Upper Lars, that is, to the border with Georgia).

Sounded slogans in last year’s protests in Magas. And now — another “aggravation” is probably seasonal. On may 1, the acting Chairman of the Council of teips of Ingushetia Murad Dickiev has released a video message to President Vladimir Putin, which immediately demanded to solve the question of ownership of the Prigorodny district.

A week later Dickiev recorded a video message to the members of the National Assembly of the Republic under the eloquent title “Another rejection the territory of Ingushetia”. That supposedly the Federal government had the idea of elimination of the Ingush Republic as an independent entity — and the whole of its territory will go to neighbouring regions. And then again — about the long-suffering Suburban area, which, according to Dashkeeva was “unconstitutional detached from the Ingush people”.

The reaction of the authorities of Ingushetia to such provocative statements, of course, did not keep itself waiting — in relation to Dashkeeva filed an administrative case under part 9 of article 13 of the administrative code (“Abuse of freedom of information”).

However, the seeds fell on fertile soil: the two messages of the Council of clans only on YouTube was watched by nearly 50 thousand people. Calls “advance on Vladikavkaz”, however, has not yet reached. But who knows what will happen next? In early June, is planned, organized climbing the table mountain (Mesa Loam), which is depicted on the coat of arms of Vladikavkaz — it is right on the border of the two republics.

On the one hand, the ascent is planning to hold the government of Ingushetia (specifically: the Ministry of external relations, national policy, press and information), and with another — the authorities in North Ossetia (committees on tourism and youth Affairs). The outcome of this action, in light of the growing debate about Ossetian-Ingush border, and hard to imagine.

— My opinion is not very optimistic. You can only talk about reducing the escalation of the conflict, but on the settlement of the situation in Ingushetia, I would not say. Problem turned into a latent form, but has not disappeared, — tells “the Free press” President of the Center for the study of global issues and regional issues, said Sirazhudinov. — The problem of the Prigorodny district remained for decades and is not softened at all. Historical memory was broadcast and transmitted Ingush from generation to generation. I had work and research on this subject — but, despite the work done, they remained in the computer archives. For the sake of peace of peoples.

The Ingush are very close-knit people, therefore, any prejudicial to their interests “experiments” with the land question can only call the consolidation companies. And here a new conflict around the Chechen-Ingush border is unlikely to be forgotten by the people. The possibility of an open conflict is difficult to predict (it all depends on the specific circumstances), but the quiet discontent among people will always be maintained.

“SP”: — Why, then, the Ingush authorities do not try to negotiate with the opposition, and act solely repressive methods?

— Rigid methods have a short-term appearance of stability, but not solve the problem, and even Vice versa. Any new event, an occasion, provocative statement can again lead to disaster escalation. Ingush grievances still accumulate and nothing is forgotten. So already more than once. Hardly a day goes by without discussion anyone the problems of the suburban district. And so for decades.