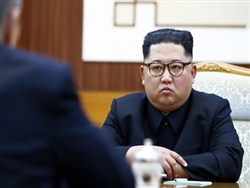 “I confirm my readiness in the near future to meet with You to discuss urgent issues of bilateral relations and important regional issues,” — stated in the message of Putin to Kim in connection with the 73rd anniversary of Korea’s liberation from Japanese rule.

“I am confident that the joint actions between Russia, the DPRK and the Republic of Korea will be able to further develop mutually beneficial cooperation, starting with the implementation of trilateral projects”, — said Putin.

June 1 during the meeting, the DPRK leader Kim Jong-UN and Minister for foreign Affairs Sergey Lavrov, an agreement was reached on the meeting of heads of the Russian and North Korean States. The day before Lavrov invited Kim Jong UN to visit Russia. One of the possible reasons for such a visit may be the Eastern economic forum.

June 12, Kim Jong-UN held a historic meeting with US President Donald trump. Following the bilateral summit signed a document on the denuclearization of the Korean Peninsula. The Kremlin praised the meeting trump and Kim Jong-UN. Putin said that thanks to her there were opportunities for peaceful settlement of the situation with the DPRK through political and diplomatic means.