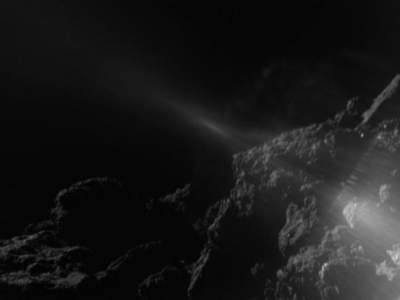 Pictures sent to the Orbiter, “Hayabusa-2”

The lander MASCOT has successfully completed its work on the asteroid’s surface Ryugu and relayed to the Orbiter, “Hayabusa-2” all the accumulated scientific data and images.

Automatic interplanetary station “Hayabusa-2” was launched in late 2014 and is designed to study the asteroid (162173) Ryugu. On 27 June, the station has arrived to the asteroid and came to a stable orbit around it. Research program is for a year and a half. After taking soil samples from the surface of the Ryugu station will go back to Earth and drop a capsule with the substance of the asteroid in December 2020. Read more about the mission, its tasks and tools you can read in our article “to Collect past bit by bit”.

Earlier, the “Hayabusa-2” is successfully dropped on the asteroid, two small re-entry module MINERVA-II 1 who were on the ground, and sent a number of shots. But early on the morning of 3 October from the Orbiter separated module MASCOT (Mobile Asteroid Surface Scout), the largest of the lander aboard the station. At this point the station was at a height of 51 meters from the surface.

MASCOT has a mass of 9.6 kg and dimensions of 30×30×20 cm. The payload module consists of four scientific instruments: infrared hyperspectral microscope MircOmega, designed to study the mineral composition and properties of the surface layer of the Ryuga, wide-angle camera MASCAM, MARA radiometer designed to study the thermal properties of the soil, and magnetometer MasMag. The battery must ensure operation of the module on the surface of Ryuga for 16 hours. The MASCOT could change its location on the surface of the asteroid due to the hopping mechanism.

20 minutes after the office MASCOT for the first time touched the surface. During descent wide-angle camera did about 20 shots and held the first magnetometer measurement, registering a weak field, which induces the particles of the solar wind disturbances generated by the module during landing. Now the mission team reported on the successful completion of the module, which worked on the surface of the asteroid for more than 17 hours, and three times changed its location. All the scientific tools module successfully completed the planned study of soil composition and properties of the asteroid, and the complete data was transmitted to the Orbiter.

The return of “Hayabusa-2” on the original 20-kilometer orbit was scheduled for 5 October, but this maneuver was postponed until October 8 due to the arrival of the Typhoon to the shores of Japan.

“Hayabusa-2” is not the only mission to return soil samples from the asteroid. In December of this year, the camera OSIRIS-REx must reach the asteroid Bennu and retrieve a sample of his soil, which he will return to Earth by 2023. 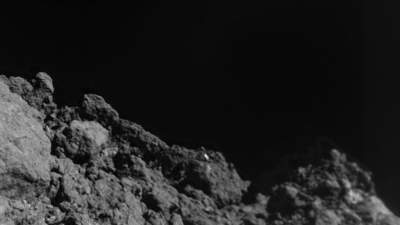