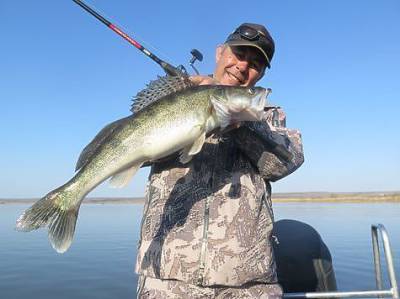 This year spring was late.

The whole March was the ice on the reservoir and after its raspyleniya Zander was in no hurry to please us with bites.

And here, right before the ban was given warm days and flowered apricot. Have to go! Of course, I never hesitated and accepted the offer.

Volgograd reservoir is replete with long and deep ravines. In one of these we went. Surprisingly, I met a lot of friends of anglers from our forum on the Internet. Indeed, the fishermen had the same idea.

I know this Creek is not very good. Fished a couple of times, nothing more. So completely relied on the experienced companion max. Not to say that his boat is “fully loaded”, but the most necessary is available: electric winch for raising anchors and a good sounder with strukturieren. I will not write what, because I do not understand this completely.

Read the “Hunt for health: what diseases await in the forest”

On the first point I’ve gone from zero good perch. Behind him pecked perch at 800 grams. That’s what didn’t expect is to meet Ikryanoye perch! Thought he, along with the pike spawn long ago.

Around us boats are also a no-no, and vivarelli perch. That is, the process of catching was attended not only us, but also in the near area. At least we thought so. But to stand in one place and whip a jig around the boat waiting for the bite became annoying.

And very tired to fish in the crowd, that is all. Wait, where are all, and catch as catch all? No. We decided to do a search. As it turned out, after we left, Zander stopped to bait the crowd. But we learned about it at the end of the day.

There around the corner. There, there-TA-RAM, where the RAM!

A little closer to the mouth of the ravine, around the corner, it was much cooler. The breeze from the cold expanses of haunted us, and the sun mercilessly “tormented”. The jacket will be removed, cringe from the cold wind and clothe – hot. And with the fish – absolutely everything interesting happened.

As Max found this place – I don’t know. Apparently investigated once discovered point. We once got up, then another – no bites. However, he purposefully circled in the same place and finally it spinning twitched, bent…

I immediately felt that the perch this time very good! Max himself has got it in the landing net. I caught this rare moment on video. You know, not often in the frame flicker perches 5 kg! Don’t even know who is more lucky, me or max! But then – no bites! We circled for a long time in the place, but in vain. It is an interesting proportion: 2 hours of time – one bite and 1 walleye. But what! It has caught us just missed that guy!

The second part of the day we are also devoted to search. A couple of times found small perch and the hour went in further search. Only at the very end we succeeded in using sonar to find and snag a place to catch a little bit of big perch.

Read the “spinners: versatile and efficient”

It should be noted that I fished for foam fish, and Max “sneakers” or “mongulu” as it is called in Astrakhan. Friends from Moscow told me that they have all caught exclusively on floating silicone. It turns out that the better walleye caught on everything that POPs up.

It turned out that many anglers have long known about this effect, which is manifested in this place. Then wonder why they are so much surprised to our catch?

Well, we were satisfied that quite clearly undertook this fishing trip, caught a trophy walleye, it is very adequately addressed in prajapatya day.