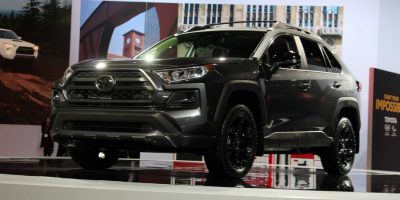 The RAV4 has been updated.

At the auto show in Chicago Toyota has brought several models, including a new off-road version of the RAV4 crossover.

The car-based crossover in picking Adventure, created in conjunction with Toyota Racing Development (TRD) based on the rally RAV4.

The car has received an exclusive version of the paint (gray body with white roof), matte black 18-inch wheels, off-road tires Falken Wildpeak Trail with a special tread pattern and rubber compound, designed according to the requirements of TRD. In addition to new colors and special tires RAV4 TRD Off-Road different suspension with special settings (and red springs too) that improve the car’s behaviour on the roads.

In the cabin version of the TRD striking new floor mats with the logo of the brand, as well as upholstered in fabric SofTex seats with embroidered headrests with TRD emblems. You can also note the decorative red accents in the interior.

We will add, at the motor show in Chicago has also introduced a limited edition version of the Toyota Land Cruiser Heritage Edition, which has a circulation of 1,200 cars exclusively for the US market. The machine is bronze 18-inch BBS wheels, black grille, headlights, foglights and exterior rear view mirrors.

This Toyota SUV offers with the 381-horsepower 5.7-liter diesel V8 with 8-speed automatic transmission and permanent all-wheel drive. The choice of body colours is limited to shades of Midnight Black Metallic and Blizzard Pearl.