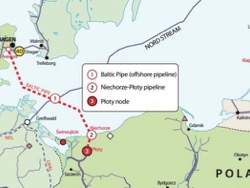 Poland thinks he’s found a way to replace Russian natural gas for its domestic market. Oil and gas company PGNiG signed with gas transmission operator Gaz-System contract for the transportation of “blue fuel” for the non-existent is the pipeline.

We are talking about the future of the Baltic Pipe gas pipeline, which will run from Norway to Poland via Denmark. A Memorandum on the construction of the Warsaw and Copenhagen was signed in June last year. It is expected that the project will be implemented in 2022, and it will cost about 1.7 billion euros.

Another contract for the transportation of PGNiG will sign with the Danish operator Energinet. The total amount of both agreements will be approximately $ 2.4 billion. After the launch of the gas pipeline Poland will import from Norway about 8 billion cubic meters of gas per year.

Thus Warsaw is going to solve the problem which will rise before it in 2022 with the end of the gas contract with Russia’s Gazprom. Poland intends to stop the import of “blue fuel” from Russia, because it wants to diversify its sources of energy supplies to the country and to gain in this sphere of independence from the Russian Federation.

But not the fact that Poland will not have to import all the same Russian gas after 2022. She may be forced to do it through intermediaries, as it happens, for example, today with Ukraine.

The article, published by the Polish newspaper Gazeta Wyborcza that: “the Project of a gas pipeline from Norway to Poland, which should transport 10 billion cubic meters of gas annually, is still in the preparatory phase. To launch it into operation in 2022. If these ambitious deadlines will be met, then the full capacity of the pipeline will earn approximately in 2024”.

However, by 2021, the Polish state-owned company Gaz-System plans to increase the throughput of an LNG terminal in świnoujście to take about 7.5 billion cubic meters of gas, which is 50% more than now.

“But this does not mean that in 2022 through świnoujście really will be such a volume of raw materials, although the potential capacity of the Polish gas terminal in use today are still only 60%, which still is one of the best results in Europe,” the newspaper said.

The amount of gas that will be supplied to the terminal after the upgrade, depends largely on the willingness of the officials, and from fuel prices. American LNG may be significantly more expensive than Russian pipeline will be regarded as “spite grandmother frostbitten ears”.