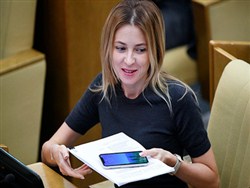 The Deputy of the state Duma Natalia Poklonskaya said that in a dream there appeared the Saint Luke Crimea (Voyno-Yasenetsky) and saved her from the disease. Video of recognition Polonskaya has published a YouTube channel of movement of the “Royal bridge”.

Poklonskaya told that after a severe illness she underwent surgery, which she started having complications. After that, she prayed Luke the Crimean and went to bed.

“Of course, any man would probably have survived, because it is pain, and fear. It is unclear what the outcome of the disease. So I once prayed to our Saint Luke before bed, I put together a book with his picture and went to bed, fell asleep. In the dream I receive by St. Luke, as if in reality, sits side by side on the bed and said, “don’t worry, it’s me, I come, I’ll fly”. And he at the wound where the operation happened zagnoenie gave me ointment. I immediately in the dream was the pain. I woke up, washed up, and I have all passed,” said Poklonski.

Earlier it became known that Natalia Polonskaya asked for forgiveness from father Sergiy (Romanov), which is called its spiritual father and ideologist of the so-called sect of carbonica. In July it was reported that Poklonski ceased to maintain contact with the sect of carbonico and father Sergius. Source URA.RU said Deputy allegedly contacted the sect during a previous relationship with the Prosecutor from Ekaterinburg Andrey Krasilnikova. Later, Poklonskaya denied the information about his involvement with the sect, but also demanded the media to publish a retraction, threatening to journalists by the court.