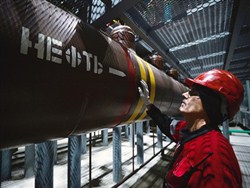 The company Transneft, an operator of the Russian section of the pipeline “Druzhba”, plans to mix the “dirty” oil in its pure raw material in order to gradually cleanse the system of oil pipelines. This writes Reuters, citing industry sources. According to them, begin to mix the oil going from next week.

On Tuesday, July 16, in the Ministry passed meeting on which the oil companies and “Transneft” could not find alternative method to clean the pipes from contaminated raw materials. The operator of “Friendship” offered to mix “dirty” oil to clean, which can lead to an increase of the content of chlororganics from 1 ppm (parts per million) to about 5 ppm in Primorsk and Novorossiysk. In Ust-Luga will rise to 3.5 ppm. According to the current July 1 to the technical regulations, the content of chlororganics in oil should not be more than 6 ppm.

Mixing “dirty” raw materials will reduce the quality of the Russian export Urals oil shipped from the ports of Novorossiysk, Ust-Luga and Primorsk, and the oil shipped to refineries (refinery) in the Central part of Russia. High content of chlororganics remain in raw until at least mid-2020 and will probably run until 2021-th.

Against this plan were made by the oil companies, saying that the decline in the quality of Russian oil will lead to a decrease in its prices. In addition, they noted that the increased content of chlororganics in raw materials will require additional technical solutions to the refinery. The oilers are going to come up with alternative solutions to problems and propose them to the government. In particular, in their view, “dirty” the oil can be sold at a discount.

Belarus in April said about the pollution of Russian oil in the Druzhba pipeline. Raw materials found elevated chlorogenic. Then pumping oil to Belarus, Ukraine and several European countries were suspended raw materials began to arrive on the system in may. In Russia in connection with the pollution of oil a criminal case.