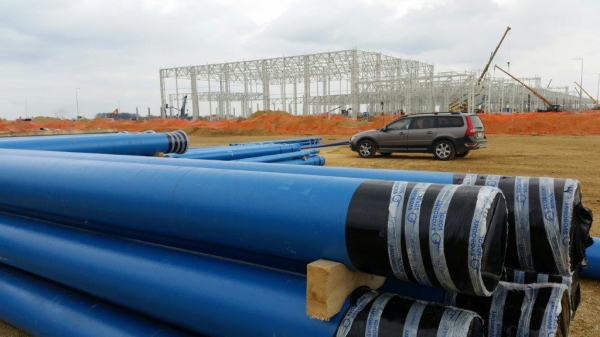 Lipetsk pipe company “Svobodny Sokol” almost half our pipes of ductile cast iron (ductile iron) exports in Poland. In this country, the pipelines of ductile iron are becoming increasingly popular.

Despite the fact that in Europe there are several large factories producing such products, pipe Lipetsk manufacturer have on the Polish market stable demand.

In Lipetsk the company supplies to Poland their pipes from ductile iron with 2013. Since that time, the country runs the official dealer, who managed to make the company’s products very popular. Today, almost 50% of the Polish market of pipes made of ductile iron – this is the Lipetsk production, the rest cast iron pipe imported from France, India and Italy.

Since the beginning of cooperation in the country has seen a number of projects on laying of networks of drinking water and sanitation. Polish builders have time to evaluate all the advantages of the Lipetsk pipes from ductile iron, successfully applying them as in laying new networks and reconstruction of the old pipeline of grey cast iron, steel and polyethylene.

In the current year in various parts of Poland has built several important objects. Directly to Warsaw on the territories with historical buildings were reconstructed water supply network. For this LTK “Free Falcon” has set a total of more than 300 kilometers of pipes of various diameters. In dense urban and historical values of areas of the Polish capital pipe ductile iron are the most attractive, as they allow to carry out the installation in the shortest terms with a guarantee of deposited objects over 100 years old.

In early September, in LTK “Free Falcon” on a business trip came to the Polish delegation. In its structure there were representatives of the Polish dealer “ConectoSP.z.o.o” yulita Krysiak and Witczak Arcadius. With them the company was visited by Marek Ronca and Piotrowiak – inspectors, scientific research Institute “Instytut Odlewnictwa” (Krakow), which operates the certification centre “IO CERT”. They spent the next audit of the production process and products with the aim of extending the validity of certificates necessary for the supply of pipes LTK “Svobodny Sokol” in Poland.

“I have already fourth time visit the company “Svobodny Sokol”, – said the representative of “Conecto SP.z.o.o” yulita Krysiak. – Know that the company is the only in Russia. This is surprising, given the vast territory of the country. Indeed, in Europe there are several large factories producing pipes from high-strength cast iron. At us in Poland they are very popular. Of course, the first time we have had the presentation of the Russian tubes in the Polish water utilities. But now about products LTK “Svobodny Sokol” is already well know and even get orders to supply pipes to our firm when planning the construction of new water networks. The quality of the Lipetsk pipe complies with current European standards, all products have international certificates, as well as the Polish certificate of conformity. Every year we perform a recertification audit to be sure the tubes are sold in their country.”

That LTK “Free Falcon” comes up with the largest European manufacturers of pipes of ductile iron, say, and representatives of the Polish certification organization.

So at the end of the inspection, the inspector “IO CERT” Marek Rocca said: “Our certification center is familiar with pipes of ductile cast iron company “Svobodny Sokol”. The products are really high quality, all characteristics correspond to the tubes produced by European companies, in what is not inferior to them. Personally, I come on for the sixth time. I can say that the company is well developed, improved production processes, quality control system of raw materials and finished products. Internal production control is carried out in accordance with standard EN 545. Today we evaluated the production chain at all stages of pipe manufacture and testing of samples of products within the framework of controlling activities. I can say that deviations from the standards no, everything needed to ensure a high quality of pipe treatments are carried out in full volume”.

During the two-day work, the auditors made an assessment of the industrial complex and, first and foremost, procedures and measures for quality control of production of pipes from ductile iron in all stages of production. In addition, the test and the laboratory, its equipment for measurement and testing, as well as the competence of the employed in research staff.

In the end, Marek Rocca and Peter Vodnjak gave the test a positive conclusion. The validity of the quality certificates of the certification body “CERT IO” on Sokolska ductile iron pipe will be extended.

This means that in the near future the supply to Poland of new batches of pipes from ductile cast iron production LTK “Free Falcon” will continue.

“Foreign audit is always a serious test for the company, because the requirements of European quality standards for products for water supply are very strict. And we are pleased to note that every time LTK “Free Falcon” has successfully passed the verification of foreign certification bodies, summarizes managing Director Anton babutsidze.