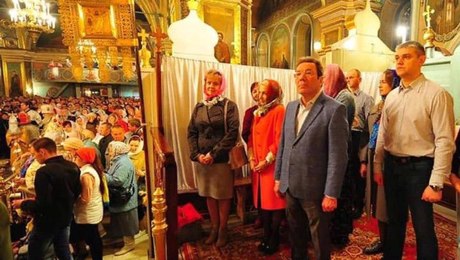 In Syzran, local officials have built themselves luxury Easter with God and priests, but without the disgusting commoners.

In a separate a curtained VIP area of the temple-officials Syzran celebrated Easter.

In the chapel for VIPs gathered a company of people with healthy persons: the mayor of Syzran Nicholas Ledin, MP Denis Kravchuk and some unidentifiable aristocrats.

As told to the parishioners, usually in this corner confess but at Easter this part of the temple was taken under the VIP enclosure-to the poor are not seen as a holiday comes from the rich and envied. And to emphasize its peculiarity and closeness to God, officials fenced off from the people of the blinds.

In short, religion is a business-class-Syzran, according to the Telegram-channel Baza.