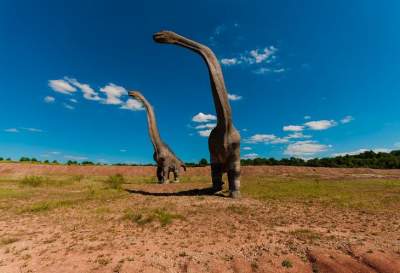 Scientists hope that they will be able to find the entire bone.

Scientists found the teeth of the ancient dinosaurs. Paleontologists believe that in Yakutia in ancient times was inhabited by giant lizards.

Specialists who conduct excavations in Suntarsky district, during the examination of the teeth suggested that it is an unknown science subspecies the largest ancient animals.

In order to more in-depth study of the species of lizards, should keep looking as new items will allow us to describe the appearance of dinosaurs.

According to the researchers, the animals were quite large: the length of the torso was from 10 to 35 meters and a weight of 15-35 tons.

Scientists hope that they will be able to find the entire bone. Dinosaurs could live in Yakutia in ancient times, because at the time there were quite a number of vegetation.