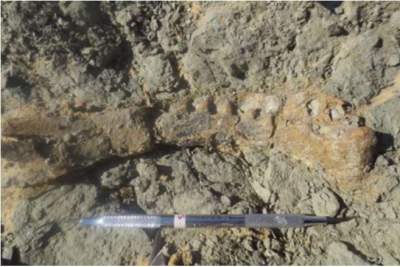 The new skeleton was the most complete of all fossils from the late Cretaceous, found in Africa.

Paleontologists Mazurskiego University (Egypt) have discovered a new species of sauropods — large quadrupedal herbivorous dinosaurs with long necks. The animal, named Mansourasaurus shahinae, lived about 80 million years ago and was the size of a bus. A description of the findings published in the journal Nature Ecology & Evolution.

The remains Mansourasaurus shahinae found in the Eastern part of the Libyan desert near the Dakhla oasis. The new skeleton was the most complete of all fossils from the late Cretaceous, found in Africa.

He is represented by skull fragments, teeth, a few vertebrae and ribs, and bones of the shoulder girdle. Mansourasaurus shahinae was small relative to other sauropod — 8-10 meters in length.

The new species belongs to the titanosaurs, which includes the largest representatives of sauropods, including Patagonian (length 40 meters) and the argentinosaurus (22-35 metres). According to the results of phylogenetic analysis of the remains, the lizard close to the titanosaurs that lived in Europe and Asia much earlier.

Scientists believe that Mansourasaurus shahinae arrived in Africa about a hundred million years ago, after the continent began to separate from South America.