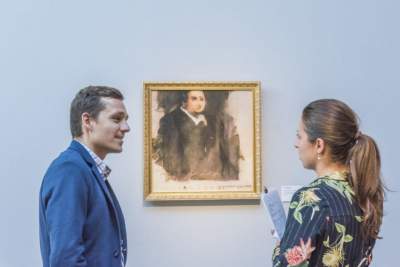 The picture is somewhat scary up close.

In the painting titled “Portrait of Edmond de Belami” shows a man in a dark coat with a white collar. In fact, Edmund de Bellamy doesn’t exist is one of the members of the fictional count’s family, the portraits of which “draws” AI-algorithm, developed by French team is Obvious.

The command uses the generative-adversarial neural network is a machine learning algorithm based on the competition of two neural networks. One of them generates the image, and the second “decides” whether to refer them to a genuine painting based on the “knowledge” numerous paintings of the XIV-XVIII centuries. The contest continues as long as the first will not be able to “cheat” the second.
Last year one of these paintings, portrait of count de Bellamy, 10 thousand euros were sold to a private collector Nicolas Laugero-Lasserre.. According to him, the work of the neural network is really a new work of art, not just imitating the past.

For other Obvious team expects to receive about 7-10 thousand euros. The money will be used to further improve the algorithm.