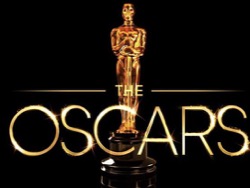 To get started just let me remind you – and some always forget that the Oscars is not a film festival, and especially American film. Only light mind citizens can earnestly argue that this premium is used in order to hurt some States. For the American Academy, by and large, there is no General “other States”. There is one powerful national (American) film industry. And they (the Academy) interested in this industry – the American – developed according to the benchmarks that they set, handing his prize to his men. If some Papuans from Burkina Faso offended that the American Academy to focus not want to see their Burkina-osovskoe movie, it is the problem of data Papuans.

The funny thing is that there’s always noise about the award “Oscar” just those Papuans who love to drive from corner to corner nureki about “Pindos”, which blatantly, and illegally interfering in the Affairs of the world. But recognizing the uniquely American “Oscar” in some ways the most important in the film world, the Papuans thereby recognize the United States the greatest country in the world. And it’s true. The main controller of world politics today – US. Therefore, the internal award of the United States in fact became the main event of world cinema. Despite the fact that the world (non-American) cinema with the presentation of this award is always presented very modestly – with only one nomination “foreign language Film”, which appeared in 1948, i.e. almost 20 years after the emergence of the “Oscar”. So, citizens, look at the “Oscar” sober eyes, not the eyes of a zombie who can’t break away from the propaganda of his TV shows on national television.

Yes, the “Oscar” awarded primarily for American films English-language filmmakers and actors. Everything else – statorseite. You do not like who and what gets an “Oscar”? Well, forget about the Oscars and follow the nomination, I don’t know, BAFTA or the Cesar award, or for those who received the Palme d’or at the Cannes film festival – Yes, even for nominated Moscow international film festival. But just keep in mind that today, the American film industry is the most powerful in the world and want it or not, it sets the standards of world cinema. So if you want to understand the main trends of world cinema, it makes sense to keep track of who is nominated to the national initially, but has become a global regulator in fact, the award “Oscar”.

Now, after this entry, a couple of my purely subjective thoughts on the major winners this year.

In this category, which was won by the film “In the form of water, “directed by Guillermo Del Toro. What can I say? Del Toro took off in 2006, “pan’s Labyrinth” and the one who has not seen this movie, simply has no right to talk about the movie. Very good his “Pacific rim”, although the first frame could impress of children’s stories about transformers (although it is true, but not quite). Well, I will not discuss the films of Guillermo Del Toro let’s just say that the Director is powerful and has long gained fame as the Director of beautiful films about all sorts of hell. “In the form of water” – the plot is strongly reminiscent of “the Amphibian Man” by Alexander Belyaev. And I’m wondering if you saw Del Toro Soviet film of 1961. In any case, at some points it is difficult to escape the feeling that Soviet film was familiar Del Toro. But if not, it is, therefore, the ideas really are in the air (or water?). In General, “In the form of water” – this is the case when the award does not cause internal protest. The film is really good. But… 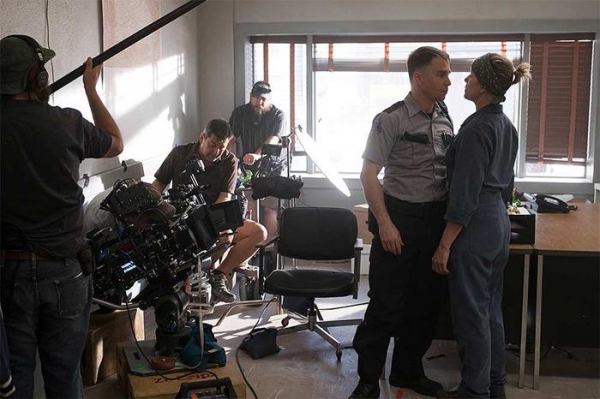 The film is certainly not as spectacular as “In the form of water,” but… But all of its 115 minutes are a breeze. A unique blend of very strong dramatic plot, with a properly paced, at first very slow dynamics, when no one second is not excessive; with unsurpassed game of gorgeous actors and a light blackish humor in places. However, the film has collected its share of Oscars. What slightly below.

A few words about the other nominees for this award – the film “Lady bird” (“Lady Bird”). 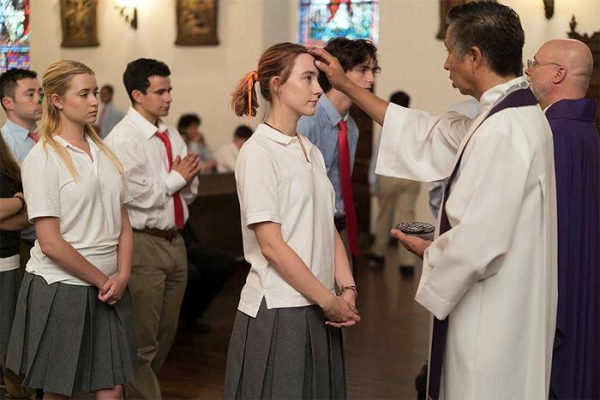 The story of a teenage girl, student of a Catholic school. The heroine was played by saoirse Ronan. Big fame came to her after the movie “the Lovely bones” (2009) about a girl who cheat to his dugout a vile pedophile, raped and killed. In the movie “Lady bird” saoirse plays a young rebel. To me the film is primarily interesting because this is only the second directorial work of the famous actress Greta Gerwig. With the second film to be nominated for an Oscar – it’s cool. In the movie Greta Gerwig played such an angular, somewhat awkward girls with his unusual inner world. Probably her most famous film, “Frances ha” (2012). Although she starred woody Allen in “Roman adventure” where he played the simple-minded girl who is cheating with a friend of her boyfriend. The eternal story. Well, here’s decided to become a Director and she’s very good at it. In General, full for the “Oscar” “Lady bird” does not pull, but a very good film. In any case, the female audience should be like. 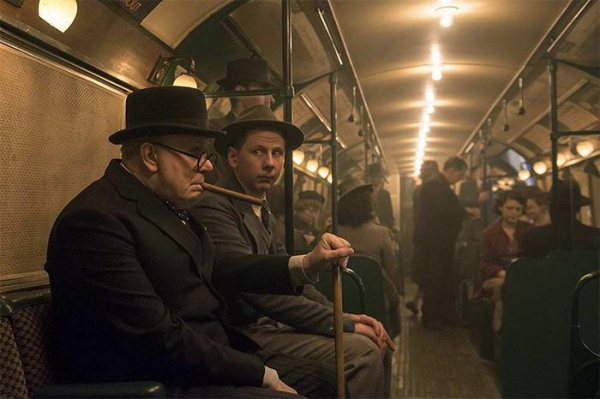 In this nomination the award was received by Gary Oldman. Five plus! One of my favorite actors (though I have many favorite actors). Oldman, I think, can play any role: the medieval twit (“Rosencrantz and Guildenstern are dead”), a vile villain (“Leon”, “True love,” “the Fifth element”), creepy, but charming bloodsucker (“Dracula”), the great composer (“Immortal beloved”), a strange wizard (“Highway 60”). But what I could imagine is the fact that Oldman is his texture will be able to play Winston Churchill. But it was on the shoulder. He played Churchill in the movie “Dark times”. Yes, so I played that “Oscar” was his trophy. A tremendous actor!

By the way, you know that, thanks Gary Oldmenu in Russia in the 90s, one party (now banned in Russia) – NBP received its recognizable flag emblem? Lemons (and maybe Dugin) is banal stole this idea from the movie “Sid and Nancy” (1986). In this film Oldman played crazy bass guitarist of Sex Pistols Sid of Vishez. The trick is that the Sid of Vishez went to a t-shirt with a completely different character. However, that’s another story. In any case, I’m very excited about the fact that Gary Oldman got an Oscar. Send rays of goodness to the Academy. 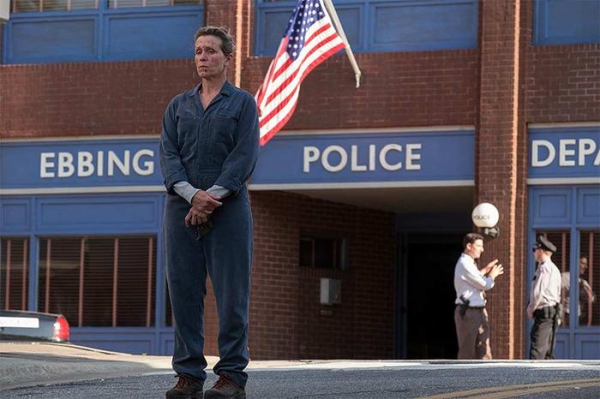 And yet, “Three of a Billboard on the border of Ebbing, Missouri” did not remain without an Oscar. In the category “lead female role” award was given to the McDormand. This is her second Oscar.First she received for the film “Fargo” by the Coen brothers (1996). McDormand played a pregnant police officer who unravels a kidnapping case. I honestly was surprised about the “Oscar”. McDormand played nice, but still, still… In my opinion that year (69th prize in 1997) is much more “Oscar” has earned Emily Watson for the film “Breaking the waves”. But the Academy, my opinion was ignored. Hard-hearted people.

But for “Three of the Billboard on the border of Ebbing, Missouri” McDormand Oscar was well-deserved. There’s no question. And even though I gave her the “Oscar” for the role of Linda Litzke in the brilliant film “burn After reading”. But for the “Oscar” this film never nominated. And McDormand was nominated for this role “the Gold globe” (though the prize is not received). 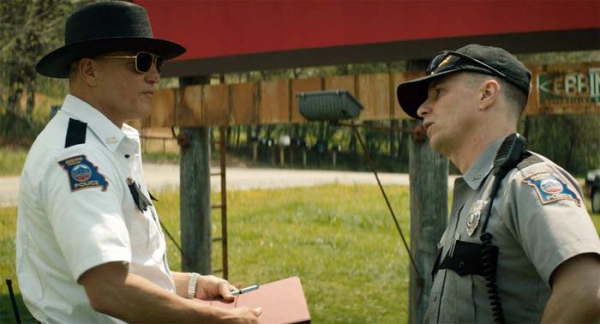 Here I folded. But how? How to make a choice, if the award in this nomination was competing woody Harrelson and Sam Rockwell? Both played in the movie “Three Billboard on the border of Ebbing, Missouri”, the two gorgeous actors (and also in my personal the top the world’s best actors), even the role they had in the movie is similar to two police officers, superiors and subordinates. And yet, the award was given to Sam Rockwell. Great! But a little pity that Harelson not received. But then, apparently, the Academy went to a purely mathematical way. Screen time Rockwell in the film is more than Haralson. And the ending, of course that’s cool too. But for those who haven’t watched until now, the film “Three Billboard on the border of Ebbing, Missouri” – my condemnation.

Well, that’s all. The other nomination I do not much take. But in these four, we can say the main categories of “Oscar” this year, very good choice of the Academy.

Oh yeah, there’s another nomination – not so important, but it stirs some Russians. 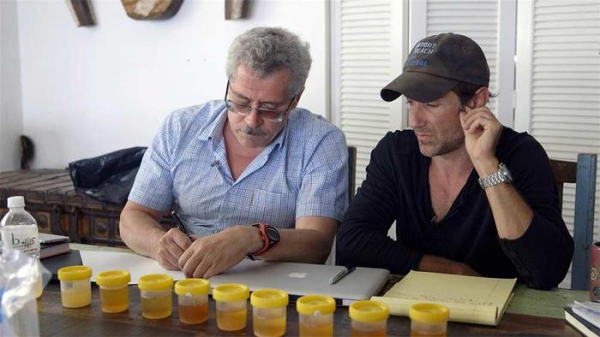 In this category the prize went to a film directed by Bryan Fogel “Ikarus”. About this movie I learned today the news of a Russian channel (I think “Star”). The tragic voice of the announcer said that “Oscar has got the anti-film”. I’m already a little coffee choked – that the anti-Russian these idiots found in the movie “In the form of water”? But is not the main nomination “Oscar” are now occupying the minds of the Russian propaganda, and the film “Icarus”. It turns out, this film tells the story about doping in professional sport and how there are ways to cheat the anti-doping tests. The film starred the notorious Grigory Rodchenkov, the former Director of the Russian anti-doping center. And supposedly with the aid of the Vogel fearing for his life Rodchenkov fled to the United States. Interview given by Rodchenkova Vogel in this film ultimately led to a big noise, the disqualification of many of the Russian athletes and the Olympics, which was the Russian team, and there was a crowd of individual athletes, speaking under a white flag. For that this documentary deserved from aleidita token “anti-Russian”. This is generally a wonderful the ability of morons – in fact, to admit his lies (and the participation in the Olympic games without a flag – a recognition of the validity of the charges), but any mention about the details of this lie called “anti-speculation”. Morons that say. However, the award “Oscar” is not relevant. Well, for me personally the film “Icarus” is not interesting. I’ve never seen it and unlikely to become watch. Because, in fact, all of his background has long been known and many times chewed.

That’s all for now.