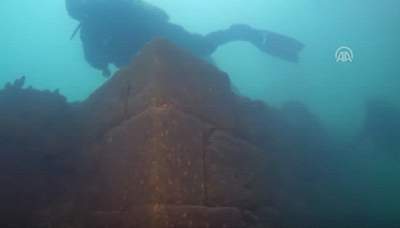 Researchers believe that this castle was built during the Urartu Kingdom.

A team of archaeologists exploring lake van in Turkey, found at the bottom of the ruins of a large castle. Scientists estimate that the building is about 3000 years old.

Underwater archaeological work in the lake have been going on for 10 years and brought many discoveries. The researchers found stalactites, rare fossils, corals and stalagmites length of 10 meters. However, excavations of the castle became the main achievement of the expedition.

Supposedly, the fortress was built during the Kingdom of Urartu, which existed in the region in the XIII-VIII centuries BC, At a certain moment the water level in the lake began to rise and living on the shore left the castle. Thus, unlike most of the other fortifications, it has not been damaged in the fighting, more alkaline water of the lake even contributed to its preservation.

Archaeologists only began work on the castle and can’t yet specify its exact dimensions, nor what is inside its walls.