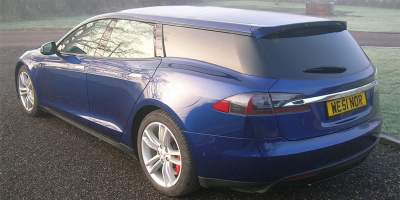 The novelty is able to accelerate from standstill to 100 km per hour in 2.8 seconds.

British engineering company Qwest has created an electric universal on the basis of the Tesla Model S P90D. The developers claim to have built the fastest car in the world with such a body type. The first photograph of the new published edition of Autocar.

The project was named P90D-SB — Shooting Brake. The car was 14 kg lighter than its “donor” due to the special rear section is made from carbon. The technical component of the electric vehicle has not been changed. Tesla Model S P90D is equipped with two electric units, which together issued 762 horsepower.

The novelty is able to accelerate from standstill to 100 km per hour in 2.8 seconds. For comparison, 670-horsepower hybrid universal Turbo Panamera S E-Hybrid, Sport Turismo is gaining first “hundred” for 3,6 seconds.

Company Qwest worked on the project of the electric vehicle with a body Shooting Brake on the basis of Tesla for more than one year. The cost of conversion of the electric car in universal amounted to about 70 thousand pounds (about 5.5 million rubles). Public premiere of new items will be held in may at the London motor show.

Qwest is not the only British company that created an electric universal on the basis of Tesla. On the project Studio Niels van Roij Design of London in conjunction with the Dutch design Studio RemetzCars. The novelty is expected to debut in March. 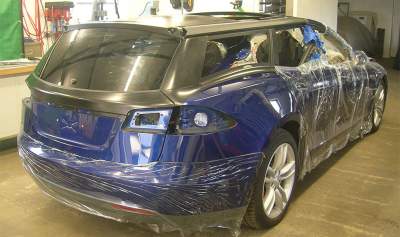 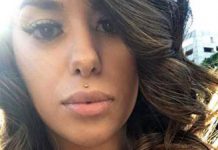 In the US, the body of the murdered model was found in two suitcases