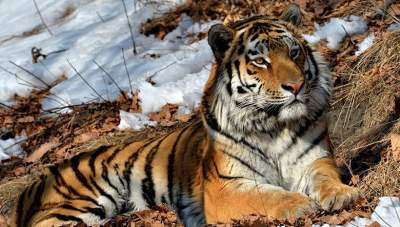 The Amur tiger has behaved so inappropriately that first caught the attention of local residents, and then experts had to catch the animal and move him to a rehabilitation center.

And it all started with the fact that on the sandy shore of the river Bikin in the Far East of Russia, near the village of Yaseniv, there was a tiger who somehow went into the forest, not afraid of people and showed no aggression. Tourists, of course, immediately removed the mysterious animal on video and uploaded the videos to the Internet. At the same time, this was urgently informed the members of the game tenants in Primorsky and Khabarovsk krais, who have realized that a tiger is something wrong and therefore appealed to the scientists of the centre “Amur tiger”.

At the present time, told journalists the head of the centre Sergei Aramilev, we captured and examined the animal, but… found no signs of trauma or disease in it, which sometimes cause predators to behave inappropriately, such as now. Of course, some illnesses have an incubation period during which to determine what is going on in the animal body, it is difficult, although the tiger is already responding to the disease. In General, time will tell, but for now… the tiger is under the supervision of veterinarians and to it threatens nothing…

However, not all Internet users agree with the conclusions of the Director of the center “Amur tiger”. Some of them saw this as something more interesting, for example, that the tiger just has consciousness at the human level (reincarnation, rebirth in the animal), but because he allegedly wanted to go back to the people. However, why is it that suddenly, none of these “wise men” to explain to not bother.

Others have suggested even that it is a tiger-shifter, who for some unknown reason was unable to return to human form, why “asked” for help to people…

Wonder if it’s really not a disease, how people can help the poor tiger?..