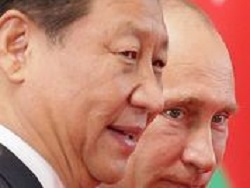 The sudden reduction in China’s purchases of Russian oil has seriously reduced the ruble.

A hundred times right, those who called #China uncomfortable and tough negotiator. Even desperate for any product or resource, the Chinese do not cave in. On the contrary, consistently and firmly fight for its own interest, without neglecting neither flattery or blackmail or manipulative technology.

And it works. Which fully and on their skin conscious now #Russia, which the Chinese partners firmly took over the vulnerable spot.

No sooner had Russian President Vladimir #Putin to declare far East is a national priority of Russia in XXI century, as China has its own interests in the region, sent a black mark.

According to estimates by Reuters, China sharply reduced purchases of oil in the world market. According to customs statistics, in October import of “black gold” Chinese enterprises amounted to 7.3 million barrels per day. And compared with September, shipments fell by 19%. That is, this decline was expected, but the magnitude has exceeded all forecasts.

Fixed custom indicator was the lowest in 13 months. First purchases cut small, independent refineries. These plants, also known as “samovars”, receive from the government an annual quota on imports. And by October most of them spent the allotted limit.

But the fact that a major Chinese corporations buy mostly #oil in Saudi Arabia or other OPEC countries. “Samovar” is mainly import from Russia, according to Platts. And now it is at the expense of Russian oil saw a decline of purchases from artisanal factories. Delivery to the ESPO pipeline for independent producers, China has fallen even more than 20% – from 1.8 million to 1.41 million barrels a day.

As is known, the main beneficiary of the ESPO pipeline and the main supplier of “black gold” in the North of China is Rosneft. Not so long ago, its head Igor Sechin promised to deliver up to 50 million tons of oil per year to Chinese buyers. While that is expected for the year only 20 million tons. And not the fact given the achievements of the Chinese factories of the ceiling of the allowed quota.

China is the largest importer of oil on the planet. The reduction of its purchases will be a strong factor of pressure on the #of rates in November. Moreover, without the growing Chinese demand further rally of oil prices, which soared to 16% for the month and new highs for two years, in principle, impossible.

And this is a black mark for someone standing over Igor Sechin. Foreign exchange market saw her perfectly, by the way. Even a small adjustment in oil prices has led to a serious slump of the Russian currency.

It seems that Vladimir Putin and his Chinese counterpart XI Jinping will be discussed on the sidelines of the APEC summit, which opens on Friday. That’s just Chairman XI does not build castles in the air in the field of geopolitics, and always firmly defend Chinese interest. And he expertly plays on multiple boards, preventing the figures and breaking the rules.

So, during the visit of Donald trump to Beijing, which took place on the eve of the APEC summit, signed trade agreements worth 253 billion. This volume was unprecedented in the history of the visits of American leaders to China.

Including China and the United States signed an agreement on the development of a plant to produce liquefied natural gas in Alaska, which could be one of the alternatives to natural gas by the Russian gas pipeline “Power of Siberia”.

It’s funny that a week earlier the head of “Gazprom” Alexey Miller warned Chinese partners about the threat of gas shortage and assured that in this matter the China can always count on Russia. But the Chinese have decided differently. So here’s a news context ahead of the summit.

Is there a Vladimir Putin a chance to beat the current leader of China? Or he would have something to give?