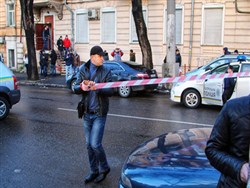 In Odessa, the man opened fire on police and was killed by return fire. About it reports the edition “Duma”.

The incident occurred the afternoon of 19 January. Police came to the house where, according to them, hiding a criminal wanted for an offence under part 4 of article 296 UK of Ukraine (“Hooliganism”). The man had used against them a firearm and was shot and killed called to the aid militiamen.

Wounds were got by three police officers, one of them is in serious condition.

According to “Duma”, the dead is 57-year-old Valentin Doroshenko, one of the leaders of the Association “ZUBR” (“For Ukraine, Belarus and Russia”). In 2010, the year he ran for mayor of the city, and the year before had challenged to a duel by the then mayor of Odessa Eduard Gurvits.