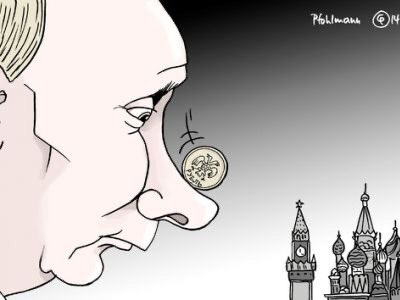 Putin now, like six years ago, will tell the tale for the stupid — that the Russian economy will benefit from the devaluation of the ruble, because a dollar received from the sale of oil we will receive more rubles.

As six years ago, “forgetting” that the sale of cheap oil, we will receive fewer dollars.
The notorious “national welfare Fund” and other pods of the Ministry of Finance will direct not on pensions, wages, “to state,” drugs, limiting tariffs and the construction of housing for the waiting list, and the support of the oligarchs courtiers, courtiers, banks, state companies and state corporations.
Prices and rates will rise and real incomes fall. In contrast to the income of top managers of “Rosneft”, “Gazprom” and “RUSNANO” and VTB, as well as salaries in the government, presidential administration and Regardie which it is possible not to worry.
Finally, once again appear the main Parkinson’s law concerning the Russian economy: gasoline is not getting cheaper, as would the oil prices fell.
“Black Swan” began its flight.

And all because Putin and Sechin were confident that, as usual, “we will do whatever you want, and for us it will be nothing.”
Fellow citizens, you still want to support Putin’s amendments to the Constitution, and Putin himself, who so likes to be President, and that’s not going anywhere?