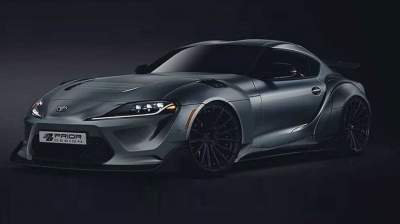 The car will go on the road only in the summer.

Despite the fact that commercial samples of new items got to stamp dealers, tuners are already working hard on how to “revive” sports coupe.

In the early stages of development engineers Atelier Prior Design has not published any relevant information about the tuning package, but these images give us an idea about future improvements. The protruding wings, of course, increase the width of the Supra a few inches, while the front has a hood with vents that allow a six-cylinder engine “breathe” a little better.

A large rear wing, I hope, will serve not so much to create the overall image of how much to increase downforce Supra.

If the buyer wants to get “charged” Toyota Supra from the automaker, the company confirmed rumors of the development of a special version of the GRMN. Details about the novelty, at the moment kept secret but it is easy to imagine that the power plant will be modified and its return will exceed the indicators that gives a standard BMW motor and 494 Nm of torque and 494 Nm of power.

In the end, the motor has a potential for growth capacity, given that the same unit has an output of 382 HP (500 Nm) in the BMW Z4.

Meanwhile, the standard coupe version of the Toyota Supra will be available in the US only this summer. The first instance of the model sold at a charity auction for a record 2.1 million dollars. 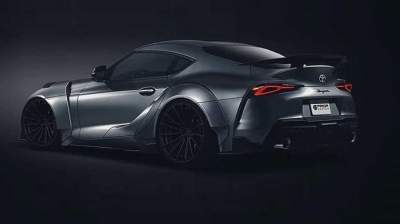